While in Colombia we decided that we wanted to do our South American border crossings by land, which we came to find out is/was not as common as I once thought. Whether that was as a result of the Venezuelan refugee crisis or just your average day, I will never know. But what I can tell you is that more than any other experience while traveling, it changed my life.

It all began when we decided to take the Pan-American Highway south to Colombia. Just before we made it to Medellín it became evident that we were not going to be able to make the journey by land as a result of indigenous protest. To give you a brief background, the Colombian Government and FARC, or The People’s Army, signed a historic peace treaty in 2016 to end more than a half-century of civil upheaval. In exchange for laying down arms, the civilians were promised basic infrastructure, subsidies, and education. Fast-forward nearly three years, those promises were not being upheld. Most of this was the result of political overturn in 2018 and Duque’s presidency. But regardless of the reason, the baseline needs of the people were still not being met. As a result, the people were taking to the streets and blocking the main economic pipeline in and out of the country. 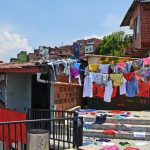 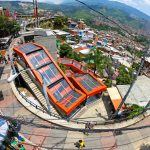 A look down through the escalators of Comuna 13 in MedellÍn, Colombia. 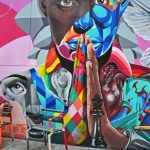 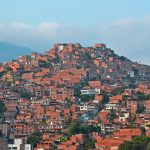 The hills of MedellÍn, Colombia. 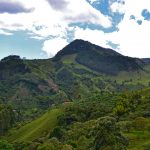 The back hills of JardÍn, Colombia. 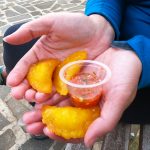 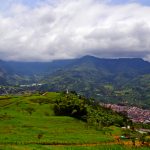 Looking down on JardÍn, Colombia. 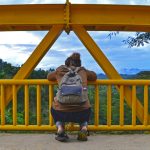 Overlooking the river in JardÍn, Colombia. 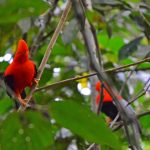 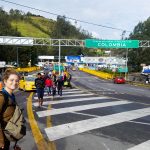 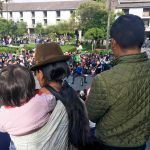 That put us in Medellín, and then Jardín, and then Calí, where it became clear that the road was not passable and also unsafe. Fortunate enough to have the means to do so, we booked a last-minute flight to Pasto from Calí. Easily one of the smallest commercial flights I have ever been on, there were less than 80 seats, no overhead bins, and after about an hour we landed on a tiny airstrip 8,300’ in the sky surrounded by mountains, military planes, and helicopters. It was very surreal.

As it turns out, the town, Pasto, is a 40-minute cab ride away. So we wove through the mountains to Pasto. After shuffling into the bus station we convened for another 3-hour van ride to Ipiales, the Colombian/Ecuadorian border town.

It immediately became clear that the warmth we had experienced in all other parts of Colombia ceased to exist once you stepped into the town. Locks were pervasive, with three or four on every door. There was far less eye contact or communication. And overall things felty shifty.

After grabbing a few quick snacks, the weather forced our hand. If I remember right we watched TV on the computer and had chips, candy bars, and beer for dinner.

When the sun broke the horizon we were on our way to the border. The taxi dumped us amongst nothing short of 1000 people and that was that. We had no idea what was going on, but it was clear that we were witnessing crisis and hope all mushed together under one huge tent branded “American Red Cross.”

As my stomach started to slowly rise into my throat I began to silently panic. The panic wasn’t from the crowd, or because of safety, it was the utter feeling of being lost in a sea of people at the mercy of authority directing us either forward or backward. The line was at least 400 people long, with hundreds more sitting on the periphery guarding belongings and patiently waiting for their chance to continue their journey to a new life. No signage, no direction, no idea what to do.

After about an hour the line had grown by hundreds and we were sitting ducks. Then out of nowhere a coffee vendor dipped through the line and tugged at Steve’s sleeve. He said, “Esto no es para ustedes.” Meaning, “this is not for you.” While I stayed in line, Steve disappeared with this fellow who took him not to the head of the line, or a different line, but to exit. And then it all became a bit clearer.

We were standing only amongst Venezuelan refugees awaiting their chance to cross the barricades into immigration and ultimately into Ecuador. But the process was slow for many because of not only lack of infrastructure, but quotas and often lack of paperwork.

There were no other nationals or foreigners trying to enter Ecuador on foot, therefore there was no other line.

So we walked to the front of the line and stood, still looking relatively dumb, just trying to catch the guard’s eye in the hopes of entering the immigration building. And while the ten minutes we stood there were brief, they truly changed my life.

The “exit” was in the middle of two separate tents. The western tent, where we were originally standing, was full of adults, singles, and adult families. The eastern tent, while less crowded, seemed to house families with children, pregnant women, and the elderly. People were negotiating, pleading, and possibly bribing guards to allow them into the eastern line for quicker passage.

Much to my surprise, people were calm and incredibly encouraging of one another. Cheers and roars of support will forever be the memories seared into my mind. Every time someone was allowed from one of the lines into the building, the crowd erupted with clapping and celebration. Sounds of joy and support for the sheer humanity of someone else’s well-being. Selflessness and love.

Coming from a culture where that kind of outward, transparent support does not exist, it really shook me. It brought me so much simultaneous happiness and sorrow that I had a hard time keeping my composure. But ultimately people were smiling and that, more than anything, made me happy for the hope that they were feeling in that moment.

Fast forward, we made it inside, through immigration, and walked into Ecuador. No one checked our passports when leaving Colombia and there was no black and white entrance or exit. Just a pedestrian bridge with free-flowing foot traffic moving both ways.

On the other side, it was all happening again. Except, this time UNICEF was there, vaccinating all children before they could enter immigration. There were fences instead of tents that made you feel like a kenneled animal.

Once you reached the immigration office you were informed that no bags were allowed inside. People’s faces were flushed with sheer worry, the opposite of what we had seen on the other side of the bridge. While some had locks to secure everything they had to their name, many did not. Instead, it seemed as though a cyclical motion of trust was establishing itself. Watch out for your neighbor’s bags while they entered, sometimes up to an hour, before entering yourself in exchange for the same favor.

Steve ended up entering in line for us and waiting for forty minutes. And when he made it to the front, a kind elderly couple I had been sitting with agreed to watch our bags while I joined Steve. It was an unsettling feeling, but in the end, as we had seen all day, the world was kind.

After grabbing our bags we walked straight into Ecuador. Again, no one checked our documents. It was the strangest feeling, but we were one our way. And about 6 hours later we were dropped off on the side of an 8-lane highway at an on-ramp about five miles outside of Quito. But that’s a story for another time.