We went back and forth on whether or not to dedicate a whole post to our day visiting Auschwitz-Birkenau, but ultimately we decided that it was too important to glaze over. Something I was really adamant about before leaving for this trip was the transparency. So often you read about travel and it’s a sheen of incredible, mind-boggling, once-in-a-lifetime, how could it not be perfect, accounts. While we’ve had a lot of these, we’ve also had a lot of challenge, contemplation, reflection, realizations, and overall humbling moments. Sometimes it’s great to smile, and other times it’s totally okay to cry, too. So, with that being said, here’s a bit about our day visiting Auschwitz-Birkenau. 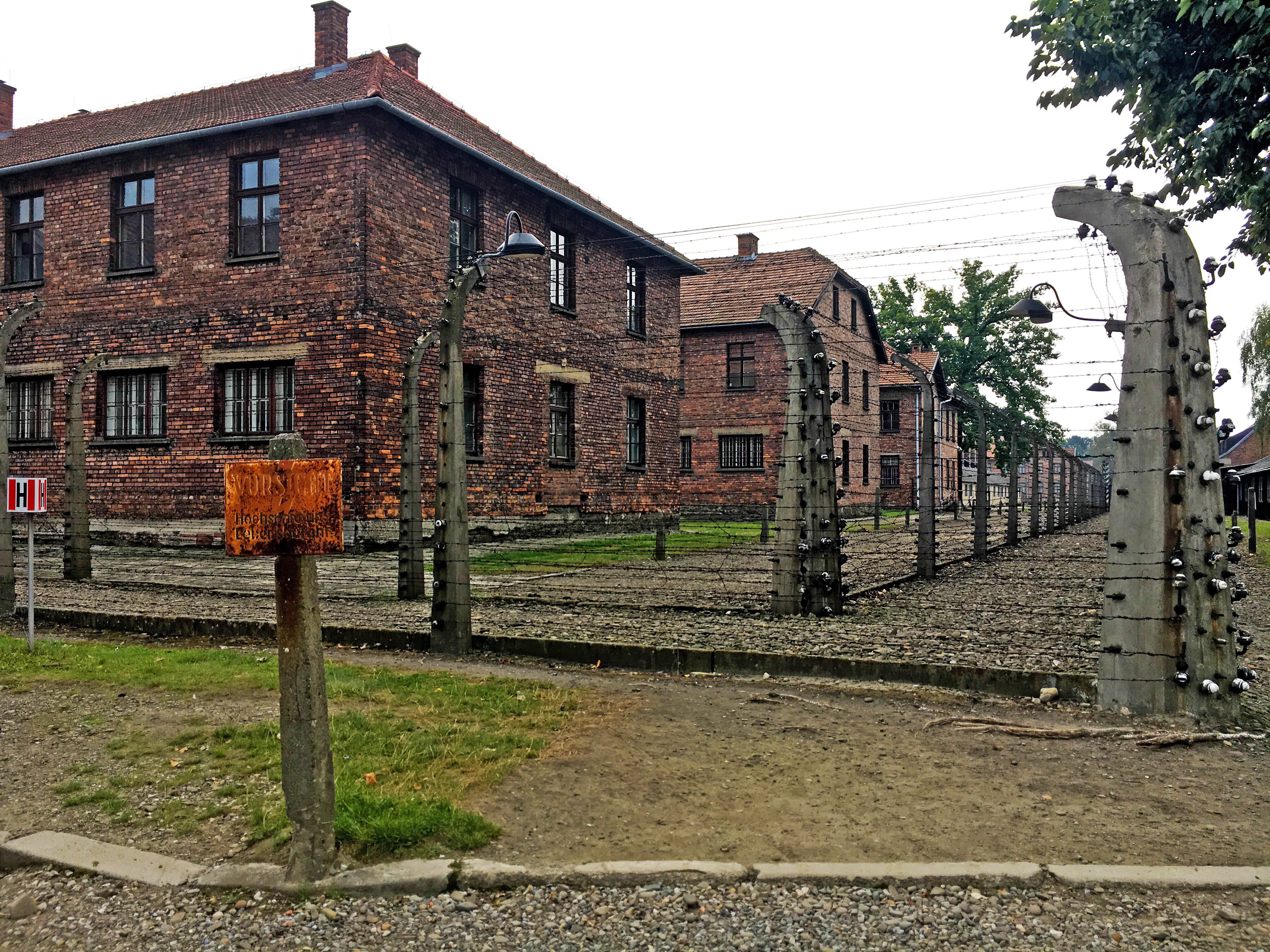 There are a few options available if you want to visit Auschwitz from Krakow. Many people take a prearranged tour, while others opt for local transportation and buying tickets on sight. If you want to visit independently, I would recommend choosing a day ahead of time and booking your tour online before arriving. It will save you a lot of time once you arrive because you have to sign up for a guided tour if you are visiting before 4 PM. However, you can enter for free during the high season after 4 PM for a brief, independent, tour of the ground. But unless you’re a historian, I would not recommend it, as most of the information comes from the tour guide. It’ll set you back 50 zł whether you buy online or at the point of entrance.

While we spent a lot of time planning for this trips, almost all of our time went into researching flights, ground transportation, accommodations, and a general idea of what to do in each town. That being said, we have yet to book a single accommodation ahead of time. So we followed in this vein for our visit to the concentration camps and quickly realized that we were going to spend a lot of time waiting. We were standing in line to buy tickets just watching English-speaking tour time blocks fill up one after the other, and subsequently watching our day disappear.

Somehow the world gifted us a bit of coincidental magic and a woman approached us asking if we would like to join her prearranged tour that left in the next 15 minutes and was slightly cheaper than the gated ticketing price. I’ve since learned that her tour company, SuperCracow, offers this same tour with transportation for 160 zł per person. So we thanked the deal gods and joined Justina on her tour.

The Death Wall, Auschwitz I

Our tour of Auschwitz-Birkenau lasted about three and a half hours. This included a walking tour of the grounds with thorough, informative dialogue of both Auschwitz I and Birkenau. What we think of as Auschwitz is actually an umbrella term for three separate camps.

Auschwitz I: Auschwitz was the first established forced labor camp of the three and was originally army barracks that were transitioned to housing for political prisoners in 1940

Auschwitz II: Birkenau was built by prisoners and was the largest of the three responsible for the most exterminations

Auschwitz III: Monowitz was the smallest labor camp of the three with a life expectancy of three to four months upon arrival

At Auschwitz I we saw barracks, photographs of survivors, and portraits of the original prisoners of war that were cataloged upon their entry. There are rooms dedicated to luggage that was seized from Jewish families. Separate rooms for pots and pans. An entire showcase full of human hair that was stripped from women and used to make textiles. There’s a room of shoes. Another of eyeglasses. There was room after room of evidence of people that once lived that were exterminated from a world that believed it was better off cleansed of their existence. It was heartbreaking and chilling. 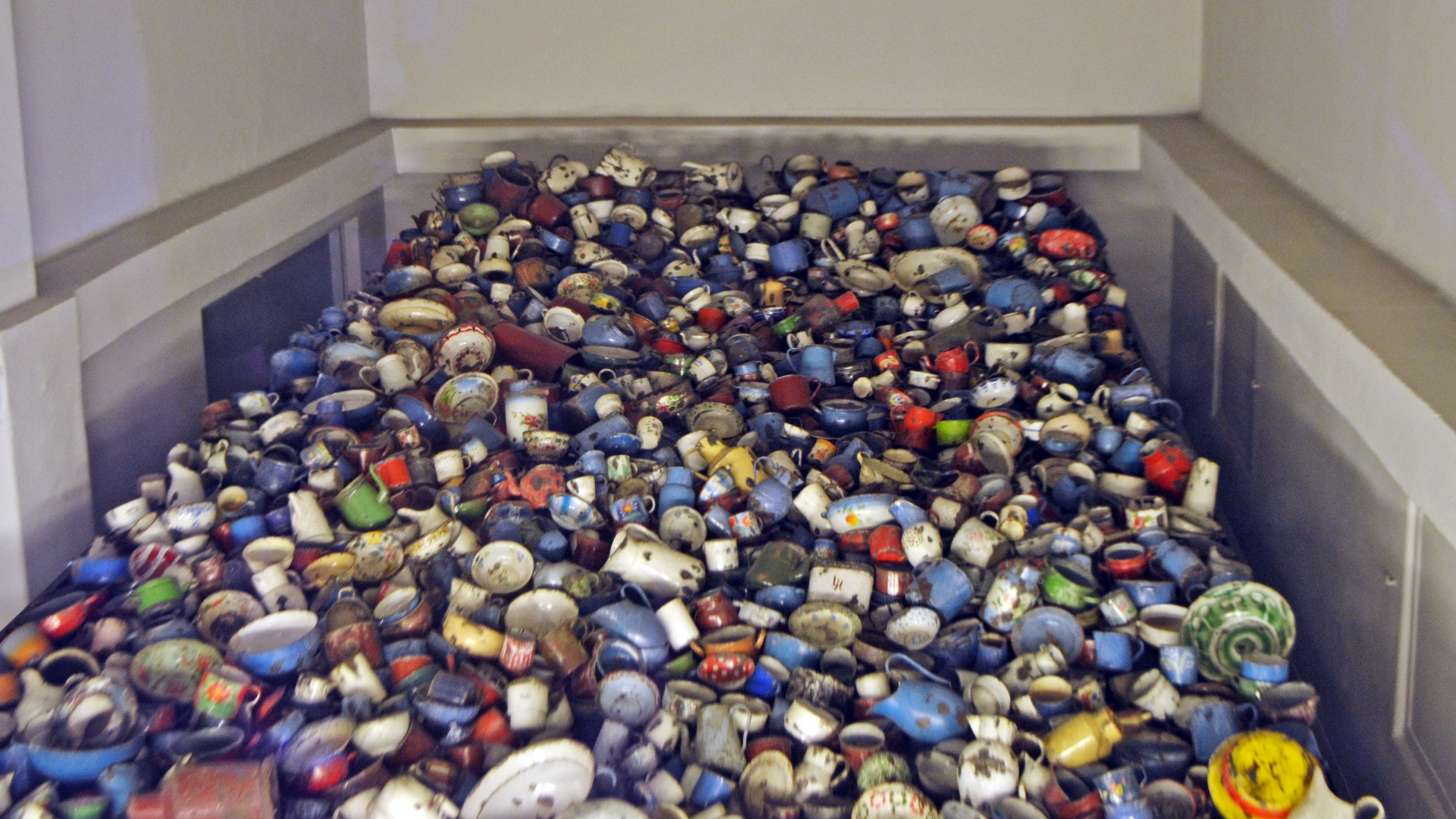 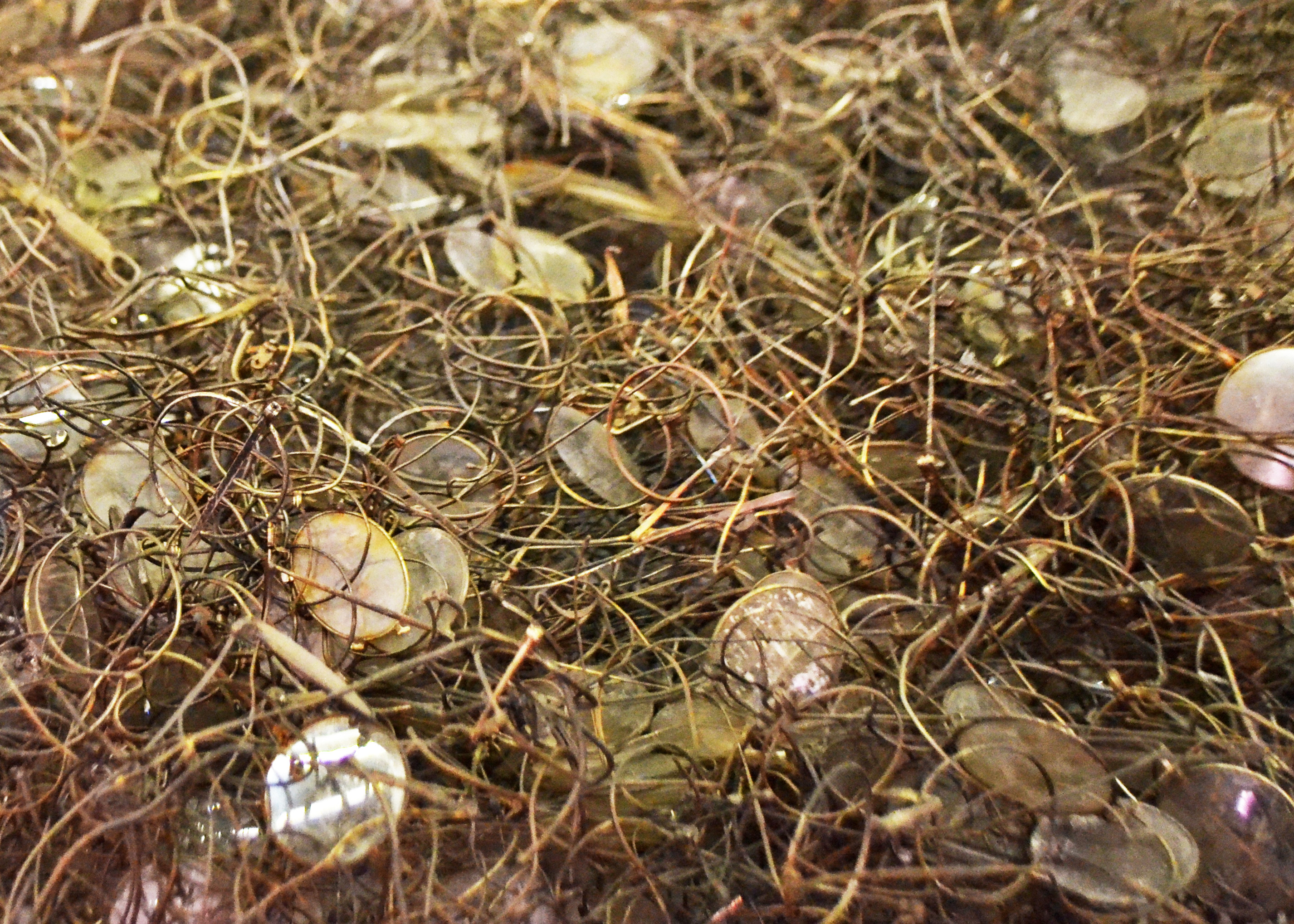 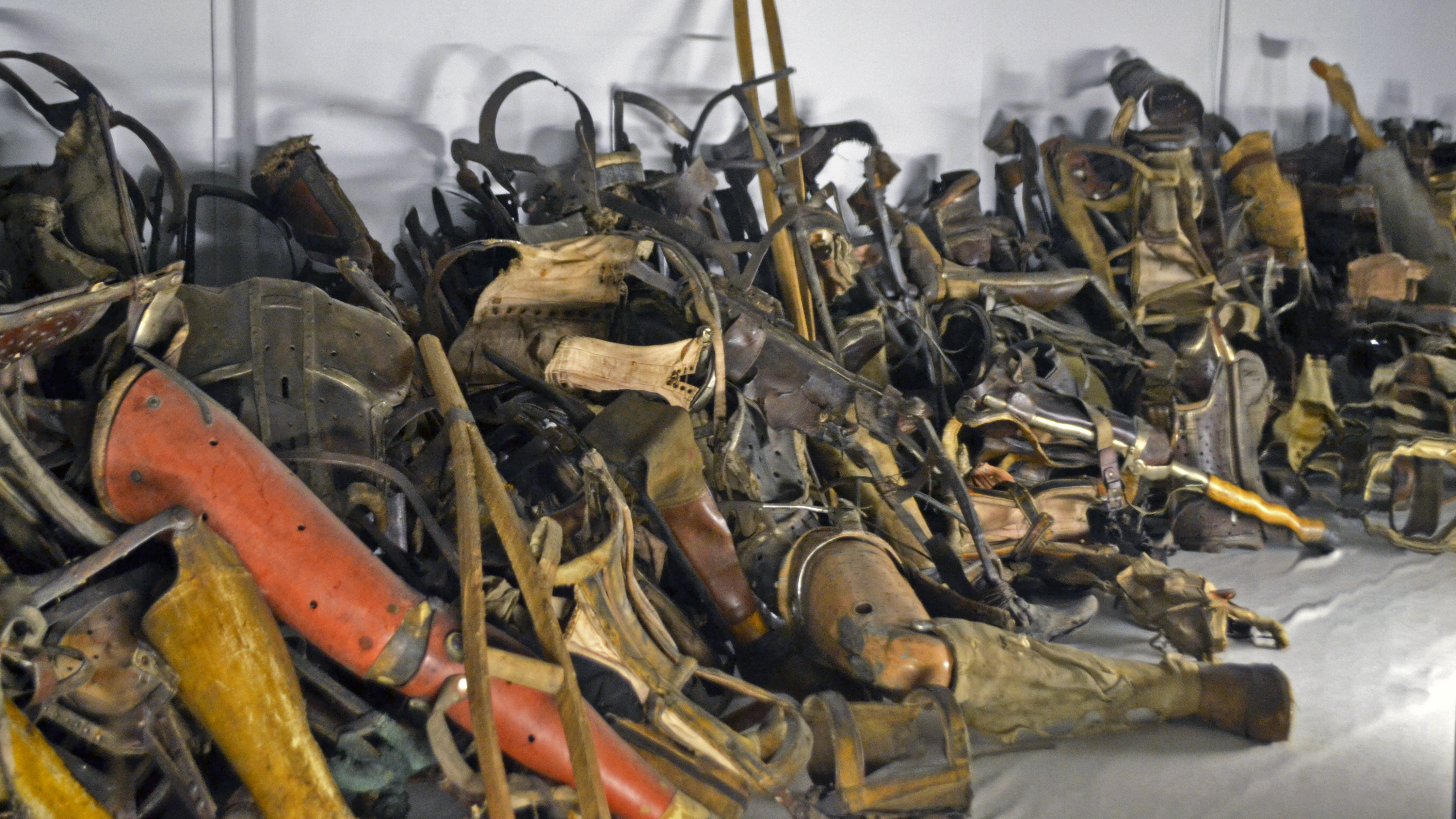 The realization that this was a historically real, functioning place of such horrors didn’t hit me until the hallways of portraits. Hundreds of men’s faces lined the walls giving blank stares into a camera that was capturing their last documented moment of existence. They quickly became slaves and subsequently, they were no more until they eventually ceased to exist. I think we can all recollect moments of clarity where pieces of knowledge and stories converge to become one, real, factual picture. This was it for me. 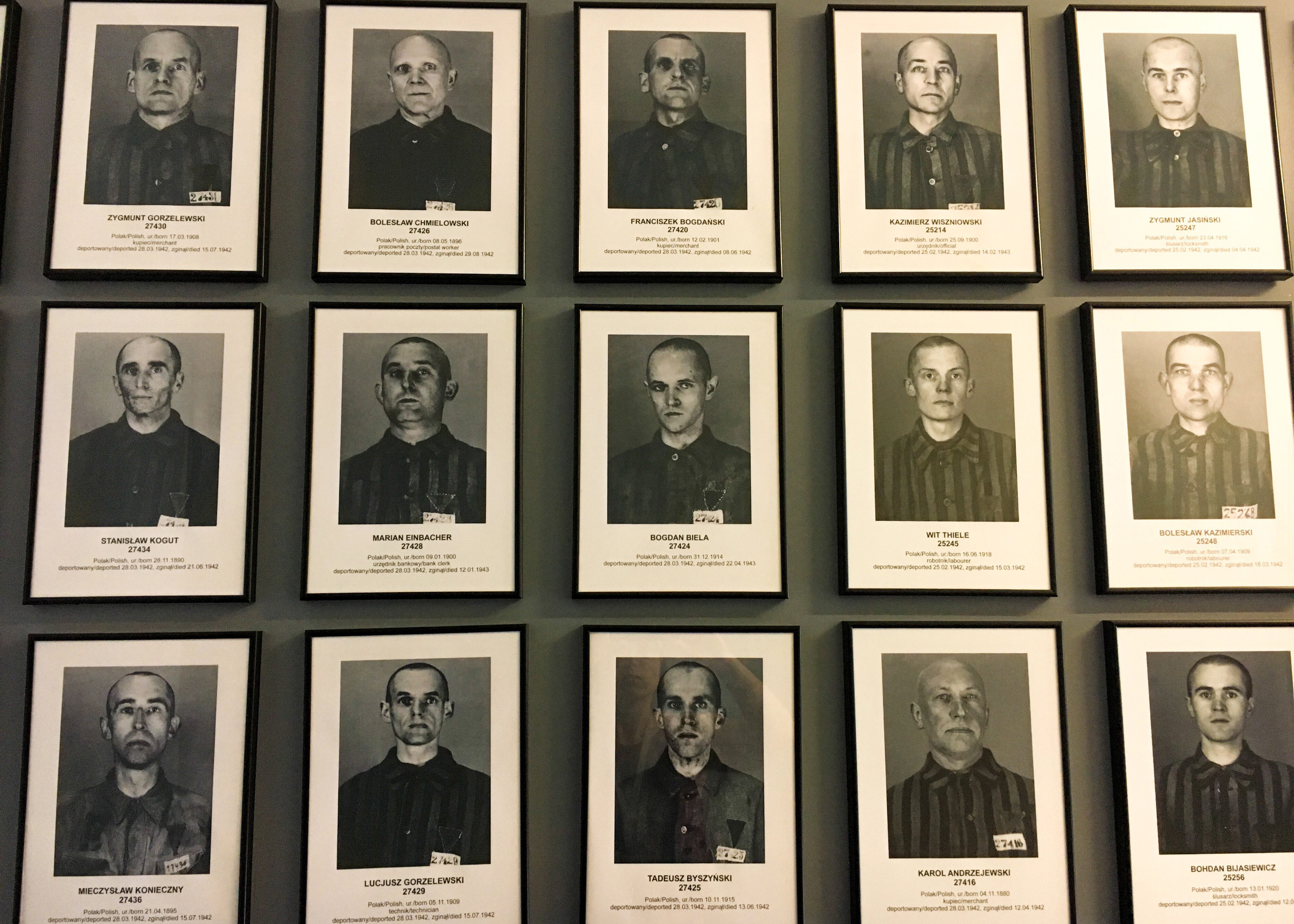 Wall of portraits, Auschwitz I

Steve and I have found ourselves frequently discussing the impact of history education in The United States. Mostly, how this affects our perspective on the world. Growing up, at least in Indiana, we received a white-washed, savior-complex education. In this every decision that colonizers or the historical US figures made was painted as heroic and ultimately right. There’s not a lot of room for error or perspective-taking, and as a result, it’s difficult to sieve through the rubble and grasp what all of these decisions have meant for others around the globe. All of this is to say that for me, Auschwitz made the hundred history books and novels that I have read real. So very real. I also think that speaking to current events there are parts of our country redirecting their pedagogy and to focus more on the facts and less on the glory. Let’s hope it only continues because it can only make us better. 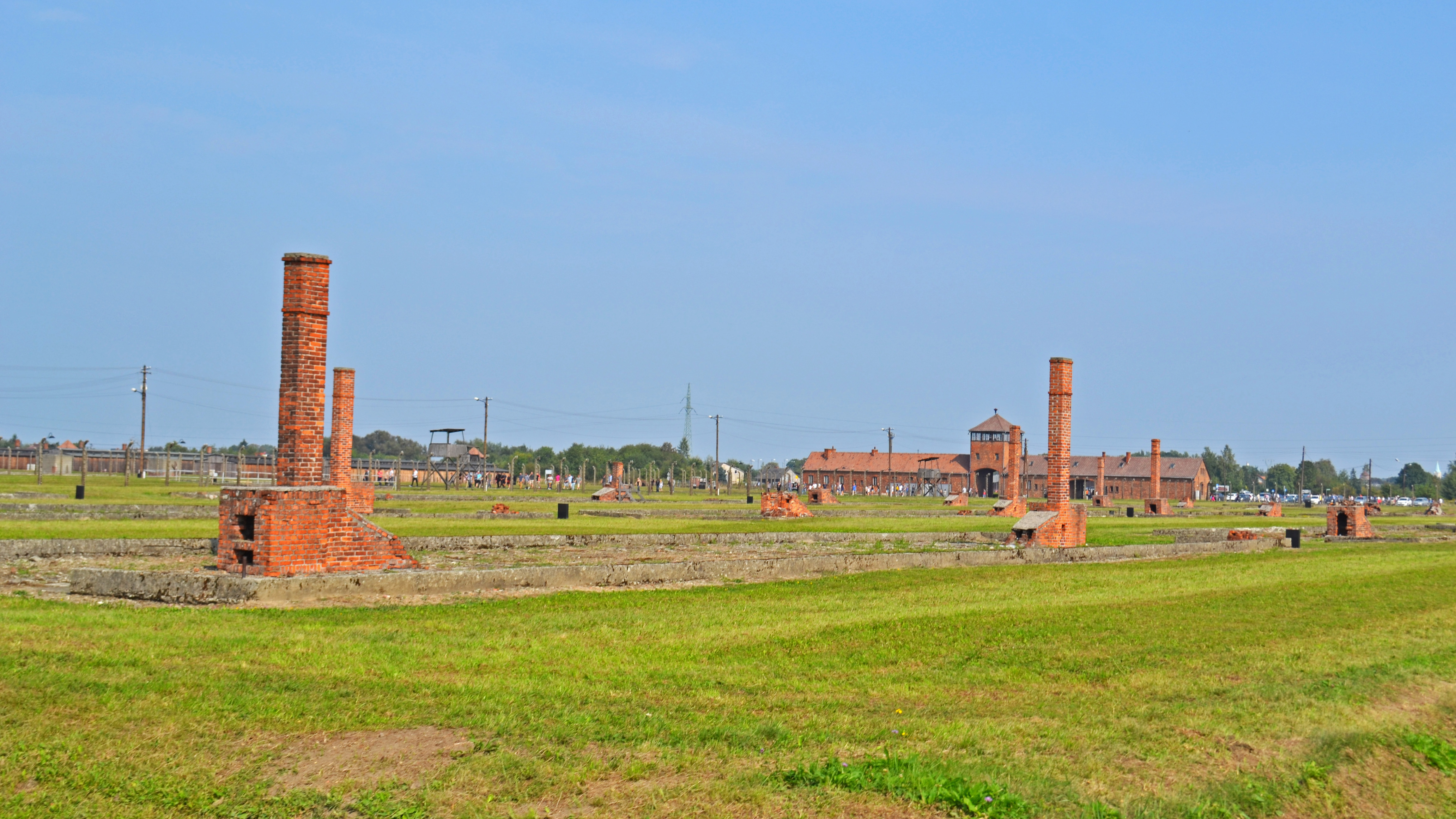 The second half of the tour was spent at Birkenau, about a 10-minute drive from Auschwitz I. Here we walked the grounds to see where families were unloaded and separated from one another and their belongings. To keep the chaos and panic under wraps, the Nazi took the time to create a faux log. Families were left to believe that they would soon be reunited with their things. They separated women from men and often children from both. The weak were separated from those perceived to be strong and channeled straight into gas chambers. Once the chambers had taken effect, other prisoners were forced to excavate the bodies and bury them, preparing for the next influx of Jewish people and other prisoners. 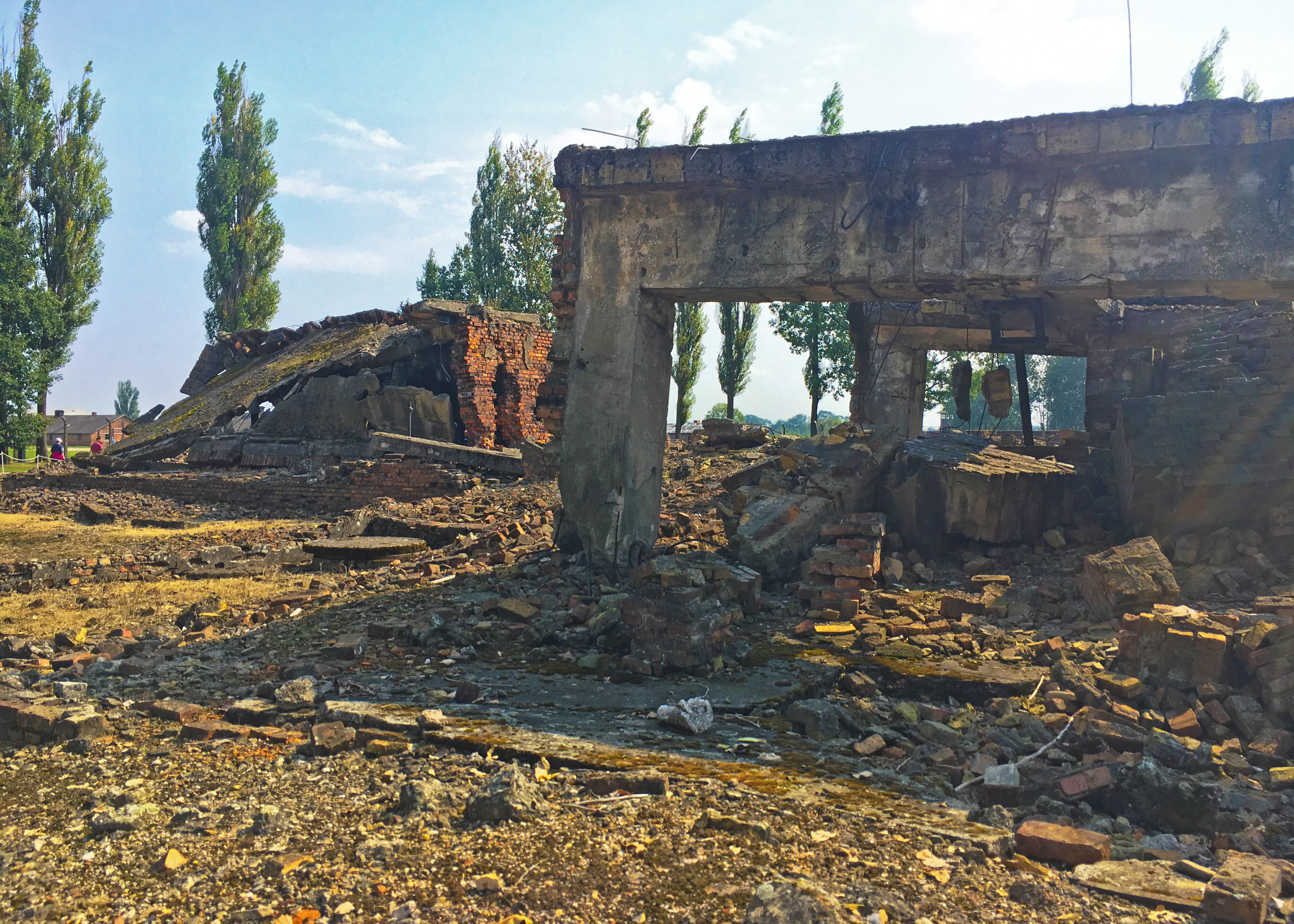 Birkenau, like many other extermination camps, became a well-oiled machine. During this time 1.1 million people were killed. The actual death toll, however, may be much higher. Many people were exterminated before there was ever any record of their existence at the camps. Before liberation, Nazi self-destructed a number of the structures in an effort to erase as much evidence as possible. Barracks were leveled, crematoriums imploded, and log books and records were incinerated. 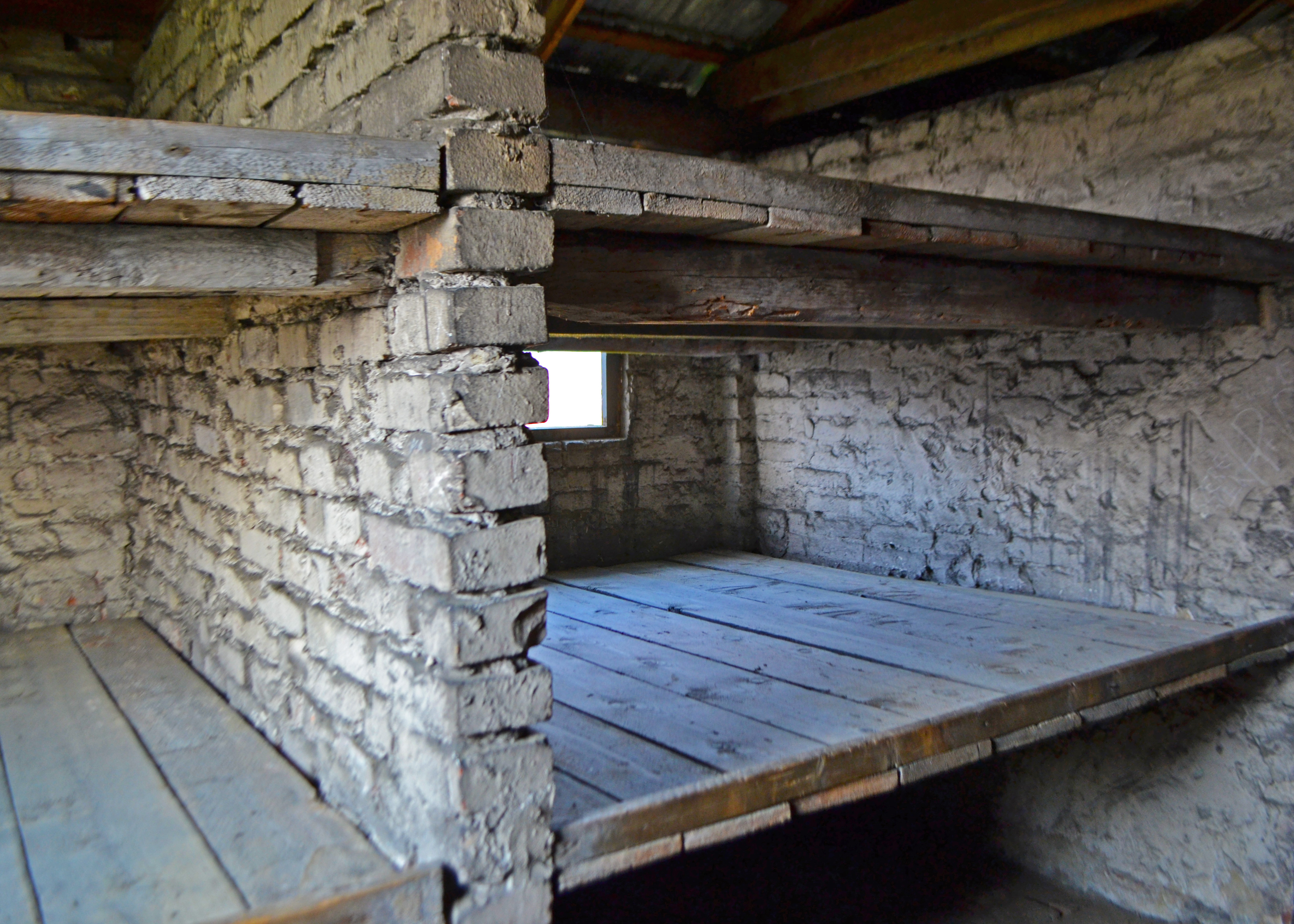 More than anything else, it is important that we learn from our mistakes. We have to reflect on the impact our actions are having on the world. It’s hard to sit and watch The United States government paw with the ideologies of Fascism. The ideologies are direct reflections of past cruelty carried out through WWII. People could, and I’m sure have, written books on the intersections of modern politics to those of WWII era. Ultimately it depends on how hard we are willing to fight the repetition of history. It’s important to remember that lifting others up is in the best interests of everyone. Your money and power, on the other hand, can only take you so far.

Go squeeze your loved ones for me.