WHAT IS WORK EXCHANGE?

Prior to leaving for this trip Steve and I spent a lot of time explaining the concept of work exchange and how we planned to participate along the way. Our initial goals were to learn new skills, give back, engage intimately with others in their personal space, and offset the cost of our travels. Having completed our first work exchange at The Harbor, we were able to experience so much more than we ever expected.

For those who don’t know, work exchange is the concept of exchanging work for some sort of agreed upon commodity. Most opportunities on HelpX are set up to be 5 hours of work per day for 5 days a week in exchange for accommodations and meals. There is often flex to this model with some requiring more or less work, some unable to offer meals, or some having specific work schedules. Regardless of the agreement, the baseline is usually a system that proves mutually beneficial to both parties.

Work exchange is available through a number of platforms, but the three main hubs are WWOOF, Workaway, and HelpX. Each is unique and has different associated costs, benefits, and setbacks. 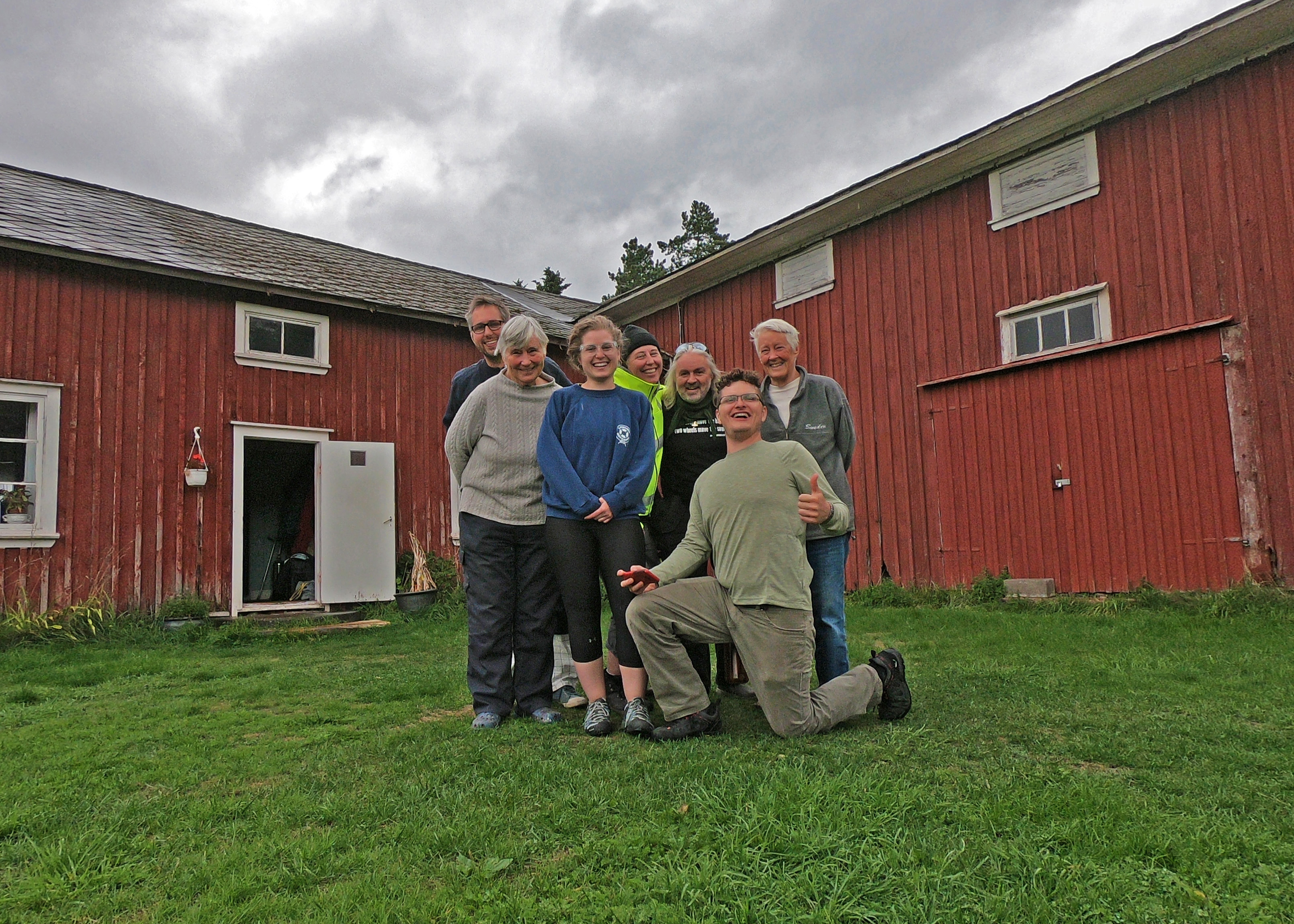 Part of the crew just before our departure.

DECIDING ON THE HARBOR

We ended up at The Harbor with a lot of research and a few emails. Compared to most travelers, we planned really far in advance for this one. We were trying to communicate with hosts almost five months out. It was nice to have an idea of what we were getting into, and also good to have something to look forward to.

Our initial contact was thorough, making Steve and I comfortable and excited about our decision. We knew that we’d be meeting multiple members within three generations of a family and participating in projects centered around property maintenance and preservation. After a few days in Gothenburg, we hopped on a bus and headed an hour north to begin our journey.

A view of part of The Harbor from the sea.

Something we quickly realized was that every person brought a unique point of view to the table. Like any family, there were occasional differences in opinion, but you’d be hard pressed to find another group that works together more harmoniously.

With four large, original buildings, docks, and endless square footage, there are always a dozen or more projects in the works. One of the main goals of preservation is to utilize natural, repurposed, and sustainable materials to enhance the overall functionality of the spaces. There are also a number of garden beds and natural landscaping that fall in line with permaculture design. It was truly wonderful to be a part of a project that is working to create community and put good into the world.

Upon arriving we had a quick bite, shared in some conversation, had a tour of the grounds, and started our first project of breaking down a large brush pile that we integrated into a hugelkultur. A hugelkultur is essentially a naturally composting raised bed composed of wood and organic matter that allows for irrigation and distribution of nutrients over time. It’s great, it’s sustainable, and overall it was pretty easy to conceptualize once we got going. We eventually rolled the front of the hugel back to prep for building a granite wall.

Collectively working together to move a steel auger enclosure.

In addition to working on the hugel, we helped with raised beds, watering, planting, moving equipment, picking and cleaning berries, and roofing. Yes, roofing. Had you told me that I was going to be walking around on a roof 10-25 feet off of the ground driving bolts into aluminum sheeting, I would have called you crazy. But retrospectively it was awesome, Steve loved it, and I felt pretty empowered. 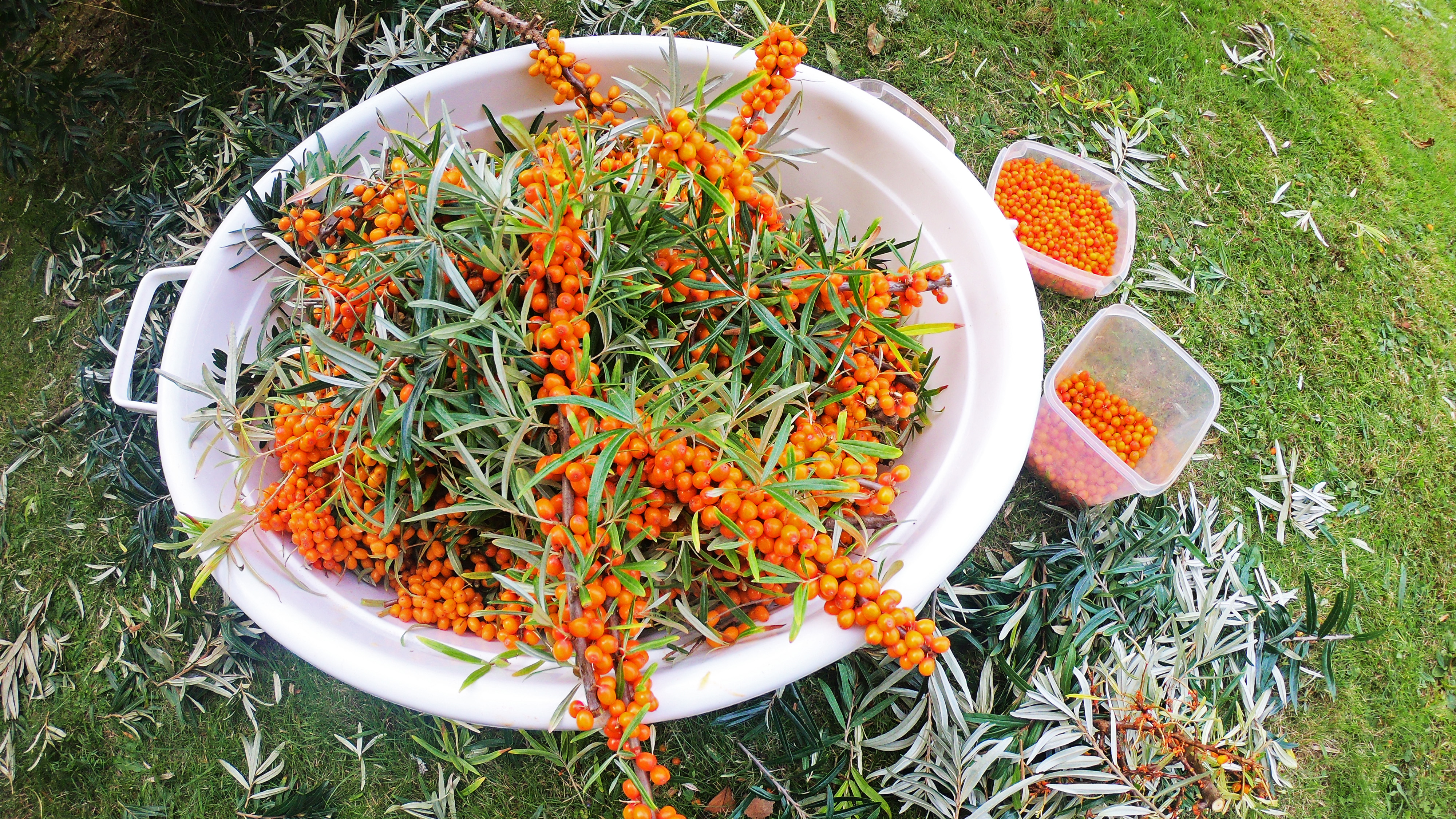 A friend of the family runs a wonderful yurt “glamping” property and had a bounty of berries ready for harvest, so we happily participated. After an hour of picking and clipping branches, we were privy to a hot tub and our first and only official shower during our one week stay.

In addition to work projects, a large part of our time at The Harbor centered around the meals. For the most part, all the meals were prepared by one person and she knew how to work magic in the kitchen. There was no need for recipes or regiment, she just made it happen. The most unique staple was available every morning for breakfast, a vast display of jams and spreads. Each one was homemade and put the bounty of harvested berries to use. 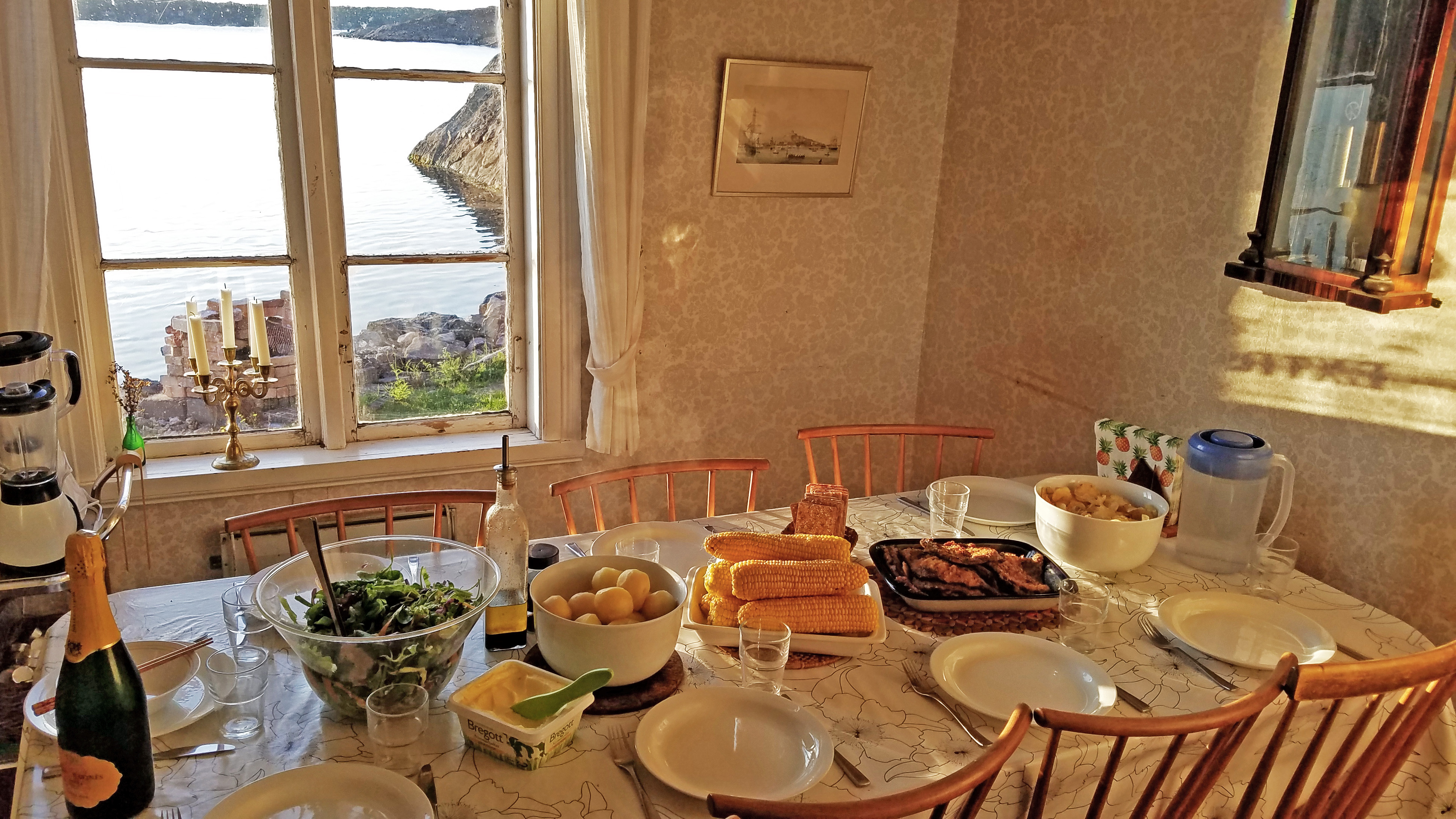 A little window into mealtime at The Harbor.

Cherries, raspberries, red currants, and more, the seaberry jam was easily the most unique and one we grew to appreciate. After a few fortunate days of good weather, part of the crew headed to Germany for a wedding while we stayed behind to work on the garden beds. Unfortunately, the rain didn’t make that a possibility, so we took to processing gallons of seaberries. I still have a little piece of a thorn in my thumb as proof.

As I mentioned earlier, our shower while picking berries was a hot commodity. While electricity and internet were readily available, potable water was not. A recent development prior to our arrival was the introduction of a waterline from the uphill dam that will soon provide water for showers and dishes. But in the meantime, all drinking water is sourced from a dock across the fjord and stored in 25L jugs. 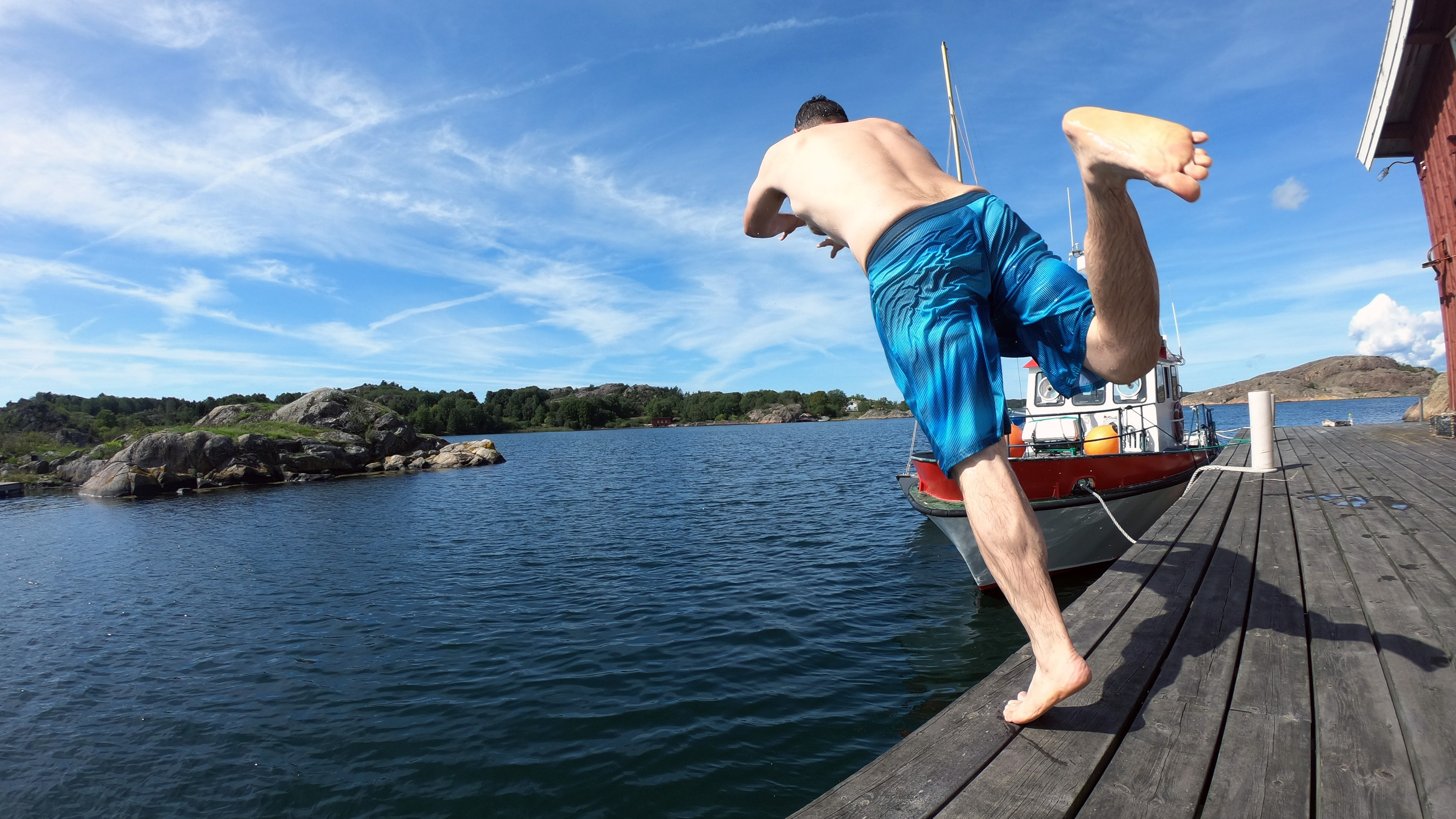 The chilly weather made it easy to fall in love with the sauna. Alternating between long sweats and plunges into the frigid water, it was rejuvenating. We were also surprised to experience a rather unexpected phenomenon our first night. Bioluminescence. Some nights when the sky is completely devoid of light, swarms of bioluminescent plankton glow in the water when they are agitated. There really aren’t words for how beautiful and special it was to see something so unique.

During our stay, there were a total of four fellow work exchange helpers. Each had their own unique story and was there to help with maintenance and preservation. One fellow was an Englishman on holiday between semesters. Another was also from England, taking a break in the midst of his military duties. 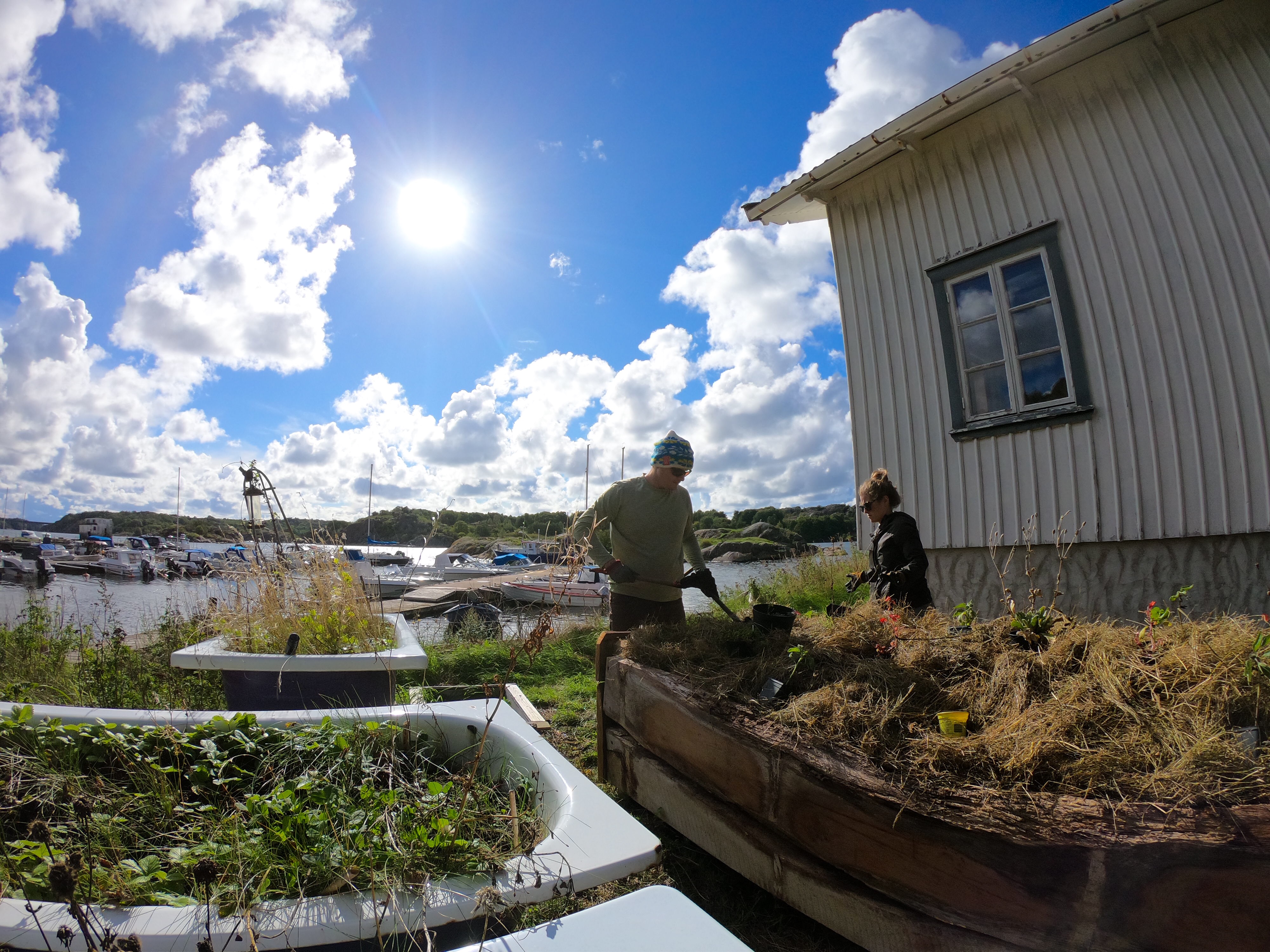 Taking a bit of time to plant in the freshly built permaculture raised beds.

The final two were young Italian gents fresh out of high school. They were responsible a story that will definitely go down in The Harbor’s memory books. When wandering around an island adjacent to the harbor, the two became separated and began to animatedly call for one another, making it very clear that they had been separated. Onlookers across the bay saw this and became worried, so they called The Coast Guard. The Coast Guard showed up as the two found one another and just in time to draw a little embarrassment before sending them back in their dinghy. Poor fellas.

While we participated in a number of work projects, it honestly didn’t feel like we gave enough in comparisons to some of the recreational activities we were invited to be a part of. In addition to saunaing, jumping into the bay to swim, and berry picking, we were also privy to my first sailing experience. 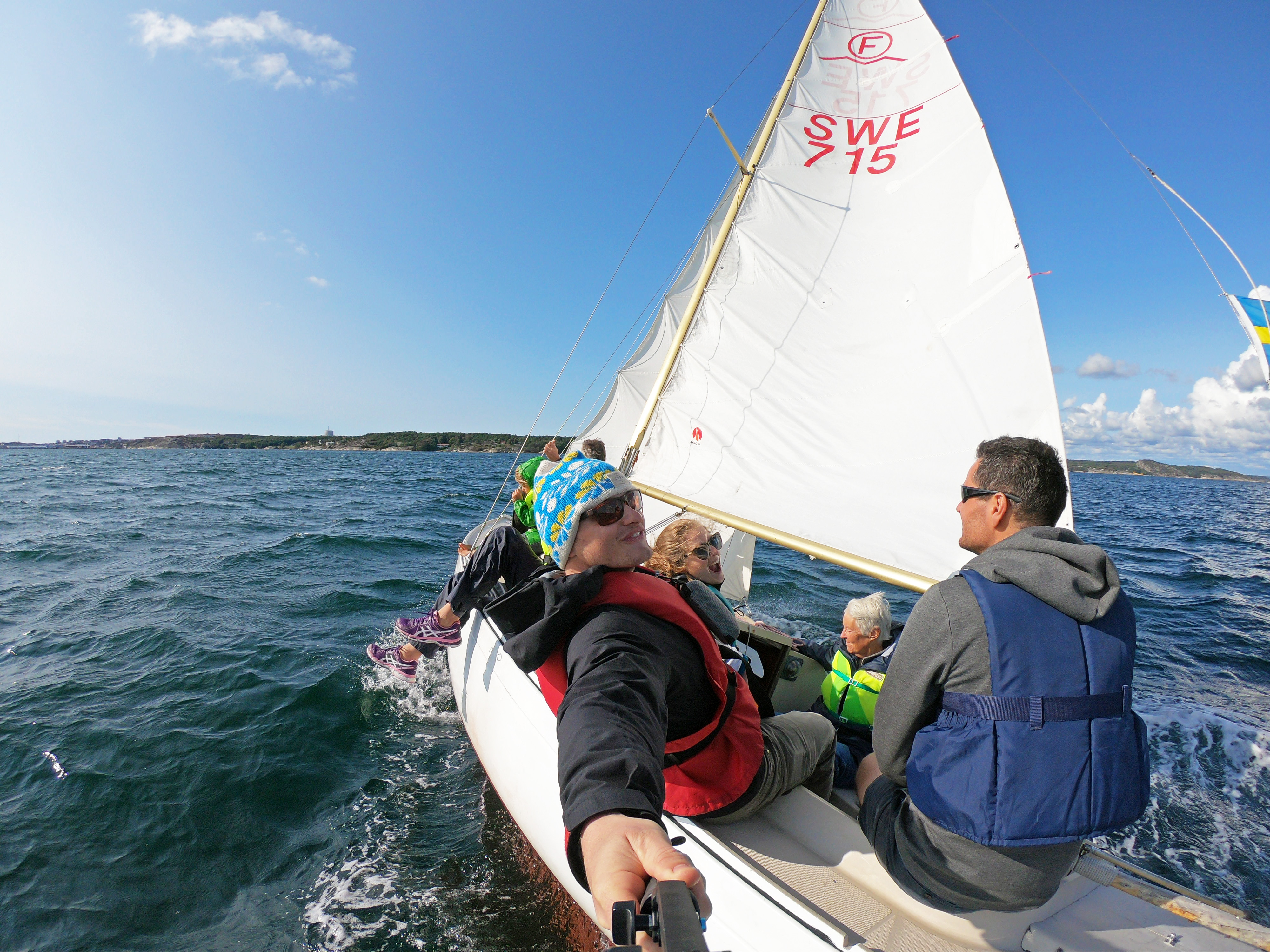 A GOPRO shot of the crew mid-sail. 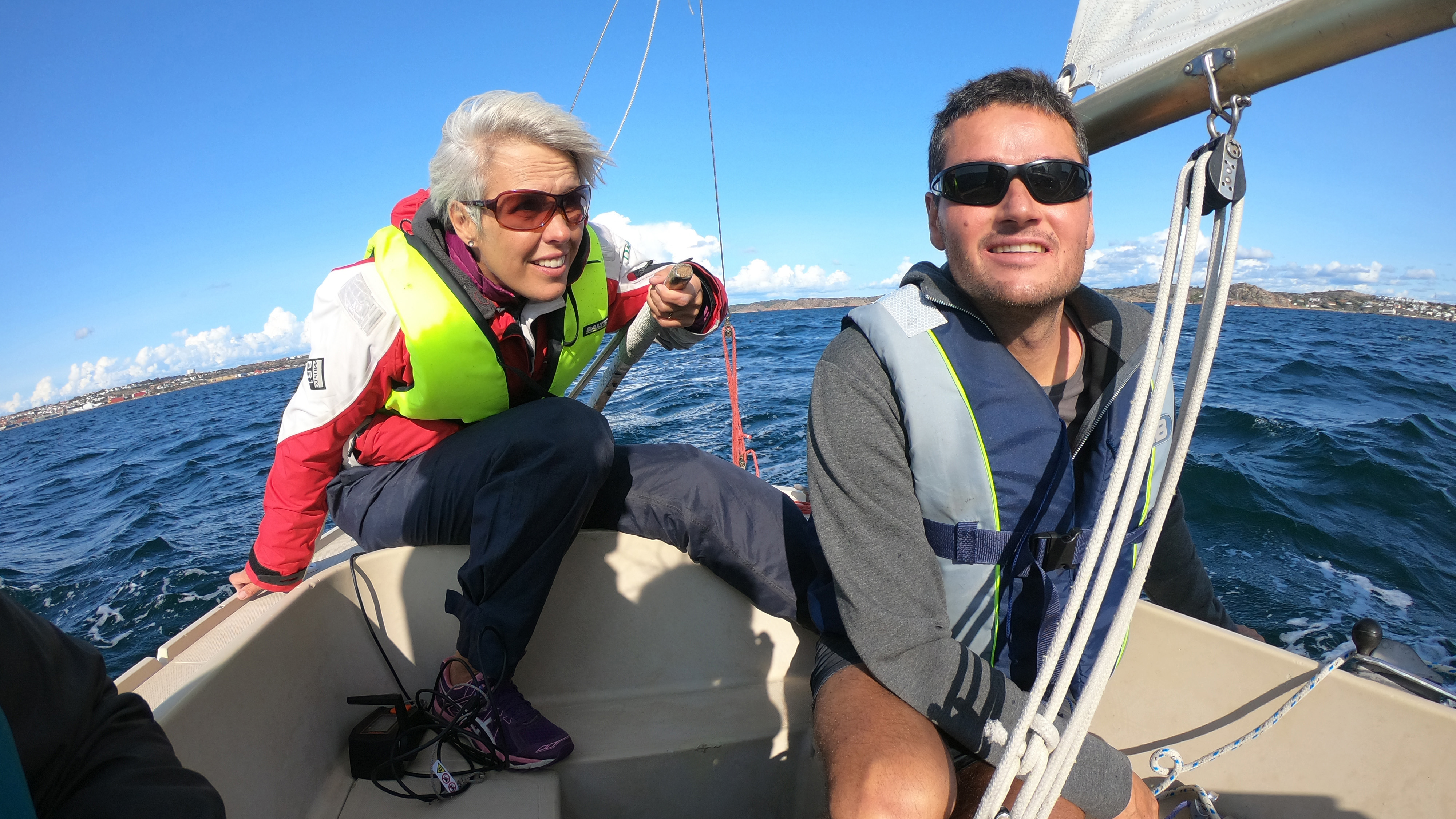 Our captain and her first mate.

A part of the family was able to visit from Gothenburg on the weekend and bring three of the grandchildren to enjoy the harbor and their sailboat. It was a beautiful experience that we won’t soon forget. Who else gets to say that their first sailing experience was in a fjord?

Steve was able to participate in a bit of fishing with some of the other fellows while I caught up on a bit of sleep. They returned with a few fresh mackerel that were quickly smoked and shared with dinner. It was a wonderful treat. 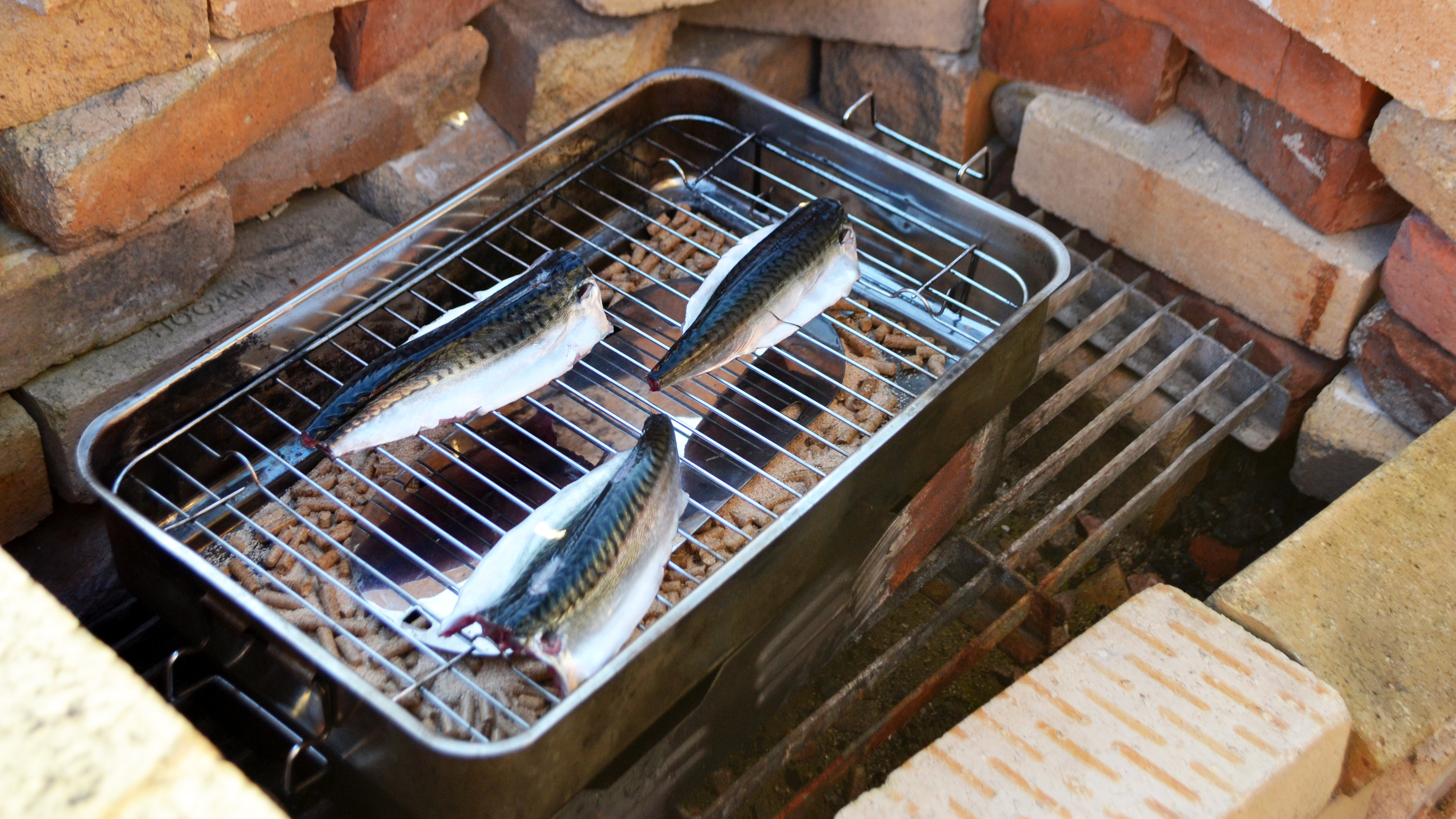 Being only a short boat ride away from Lysekil, we were able to participate in a water run and spend a few hours exploring the town. There were a number of cute, local cafes, a beautiful neo-gothic church, and most importantly, a few hubs for fresh seafood. Excited about sill, Steve and I accidentally purchased a shy kilogram of fresh herring for $4.

As it turns out, the master chef was not familiar with using fresh sill, so we were given the opportunity to cook a meal. A little preparation later we were able to make a delicious gluten- and egg-free fried herring over garlic, onion, and potatoes with a lemon cream sauce and fresh salad. Mmmm. It was nice to be back in the kitchen. 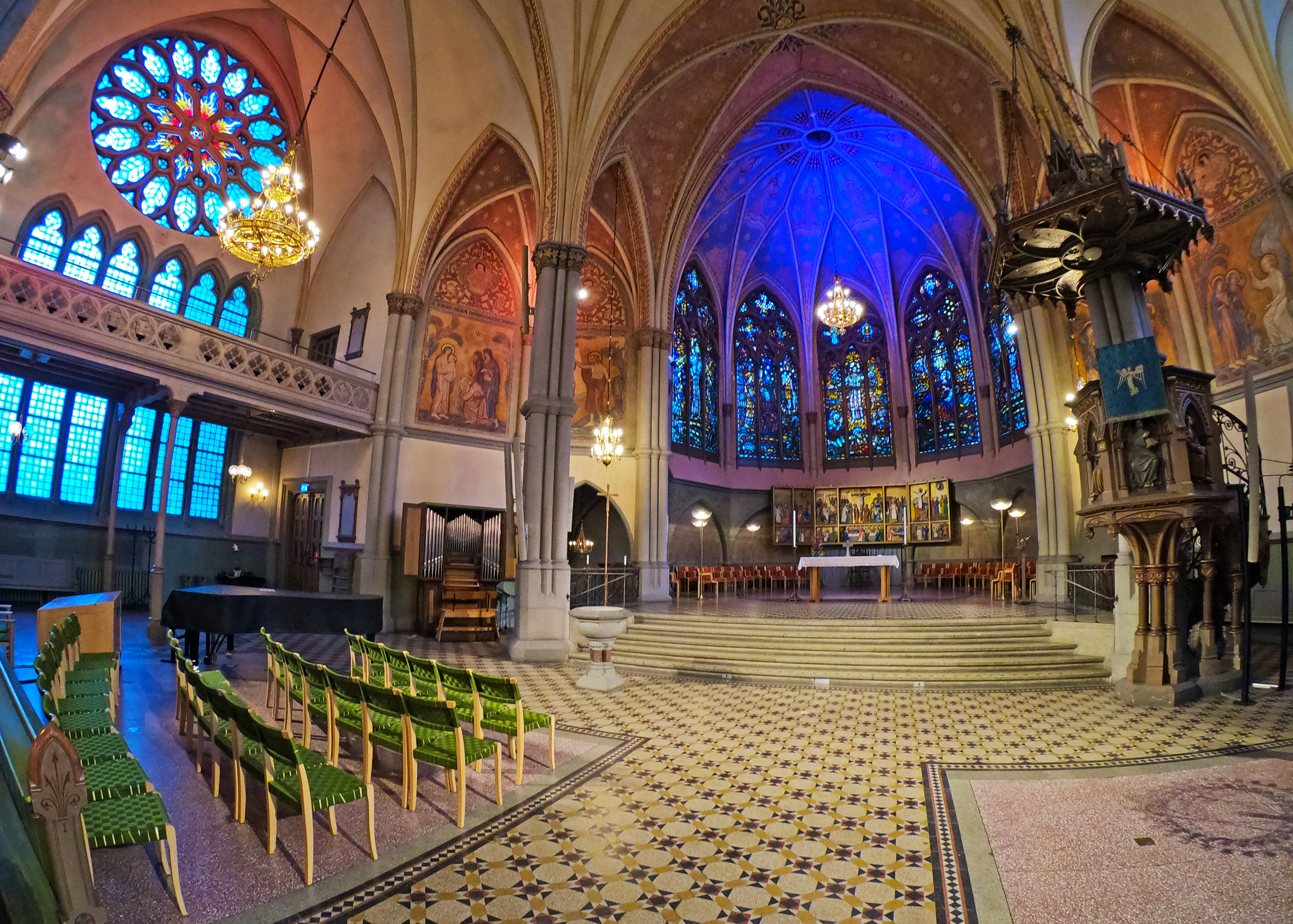 A peak into the Lysekil church visible from the harbor.

In addition to their work at The Harbor, each member of the family has their hands in a number of pots. Just to give a bit of insight, the skills and focus on community here were incredible. Collectively we were able to learn a bit about work in pathology, natural remedies, building with hempcrete, interior design with repurposed and sustainable materials, starting a business, hosting a 400-500 person party, driving an ice cream truck, film production, permaculture, roofing, and so much more.

Moving forward we hope to continue to learn as much as we did here. We truly left feeling like a part of the family and hope to return one day having continued to build on our new friendships. While we were both a little unsure of what to expect when going into our first work exchange, this experience solidified our decision to continue to chase this type of intimate opportunity.

As for future plans, we have another work exchange lined up near Naples, Italy in the coming weeks and are actively looking for something in Portugal. As always, if you have any ideas, send them our way. We’ll soon have something to share on our time in Poland. Be sure to keep an eye out. 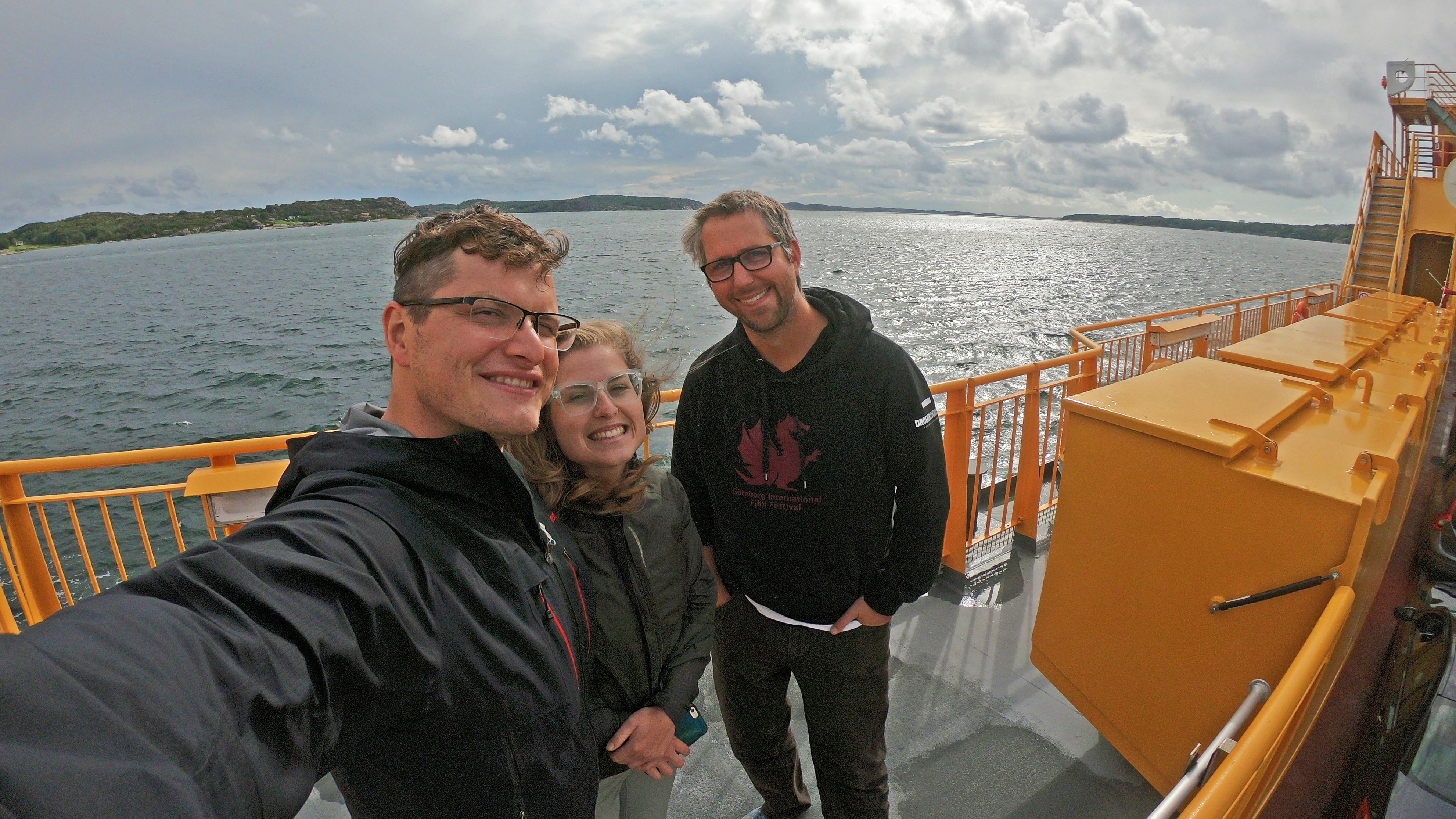 A selfie on the ferry headed to Lysekil. 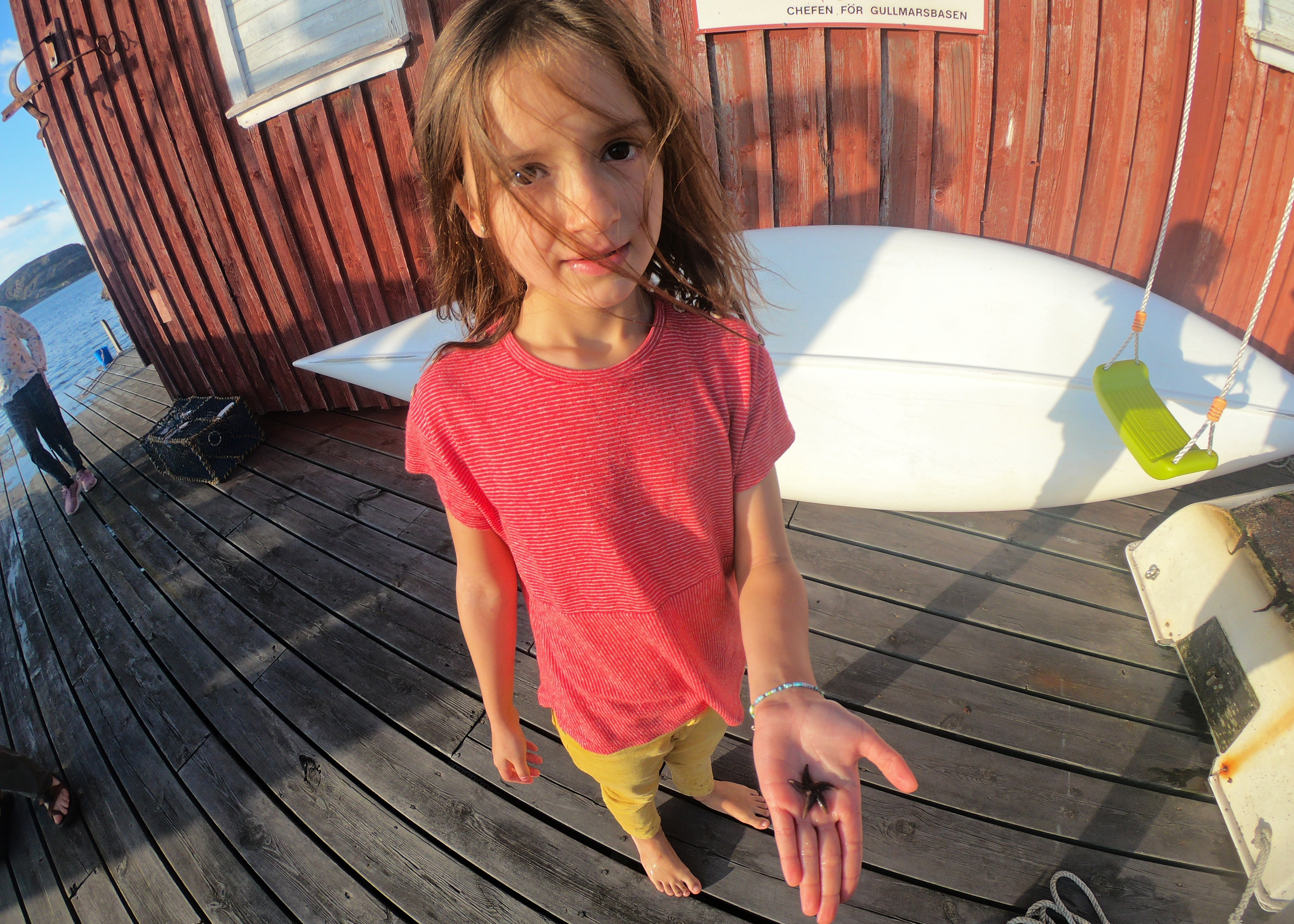 One of the grandchildren sharing a look at the sea star. 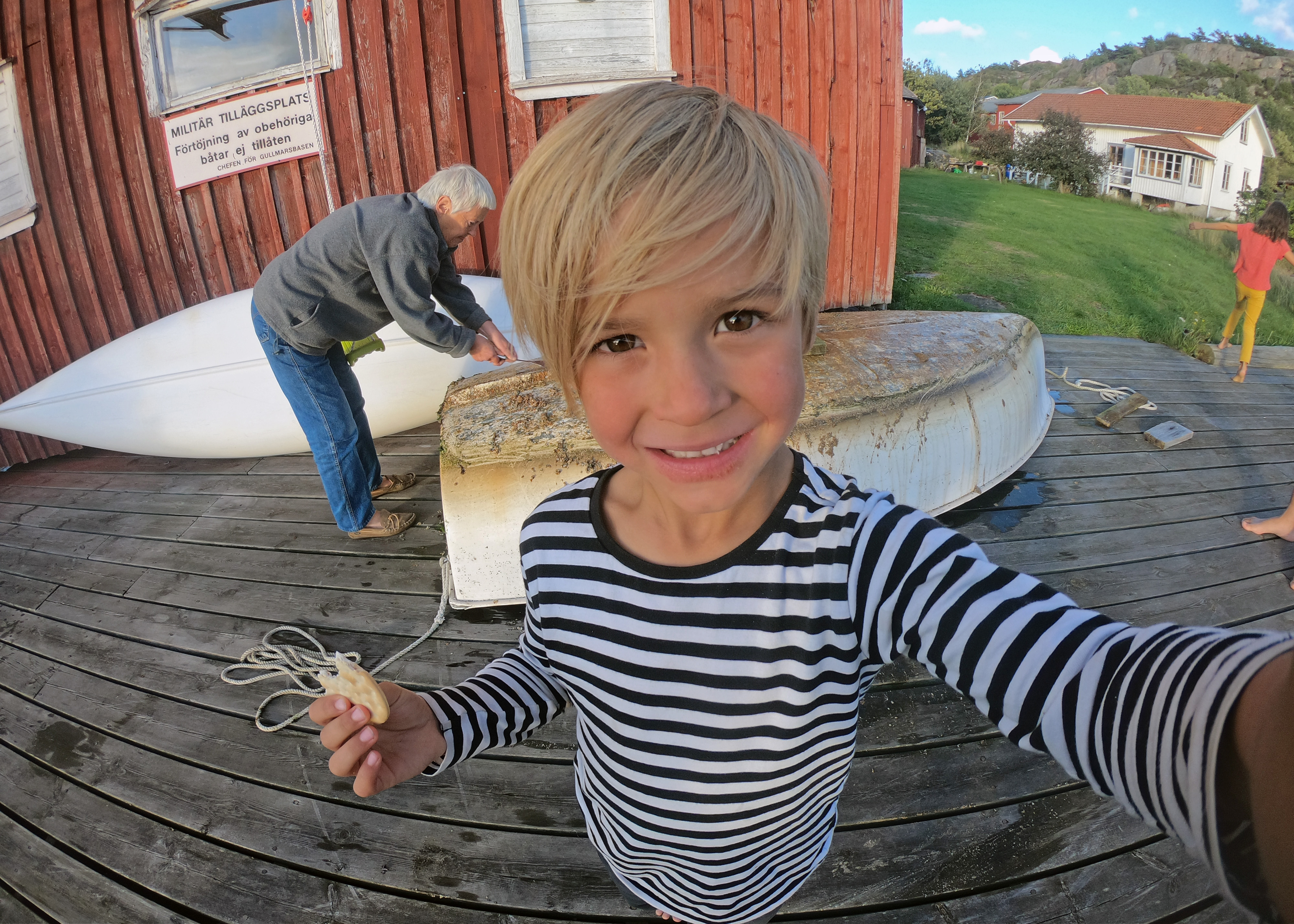 The GOPRO proved to be a good selfie tool for this smiling face.

And before we go we have to send out an apology to the oldest member of the third generation. She was a bit under the weather during our visit, so we weren’t able to capture any photos to share of her smiling face. Sorry, M. <3

IN THE MEANTIME, BLOOPERS:

Sending all of the love-

Up Next: Warsaw, Poland