What a gem. Our discovery of Concepcion de San Isidro was unintentional but all thanks to Airbnb. We were looking for a spot to stay our first night in Costa Rica that was outside of downtown San Jose but didn’t require that we drive all the way to La Fortuna in the dark. What better place than a small, privately owned and operated coffee plantation. Ah, my heart. 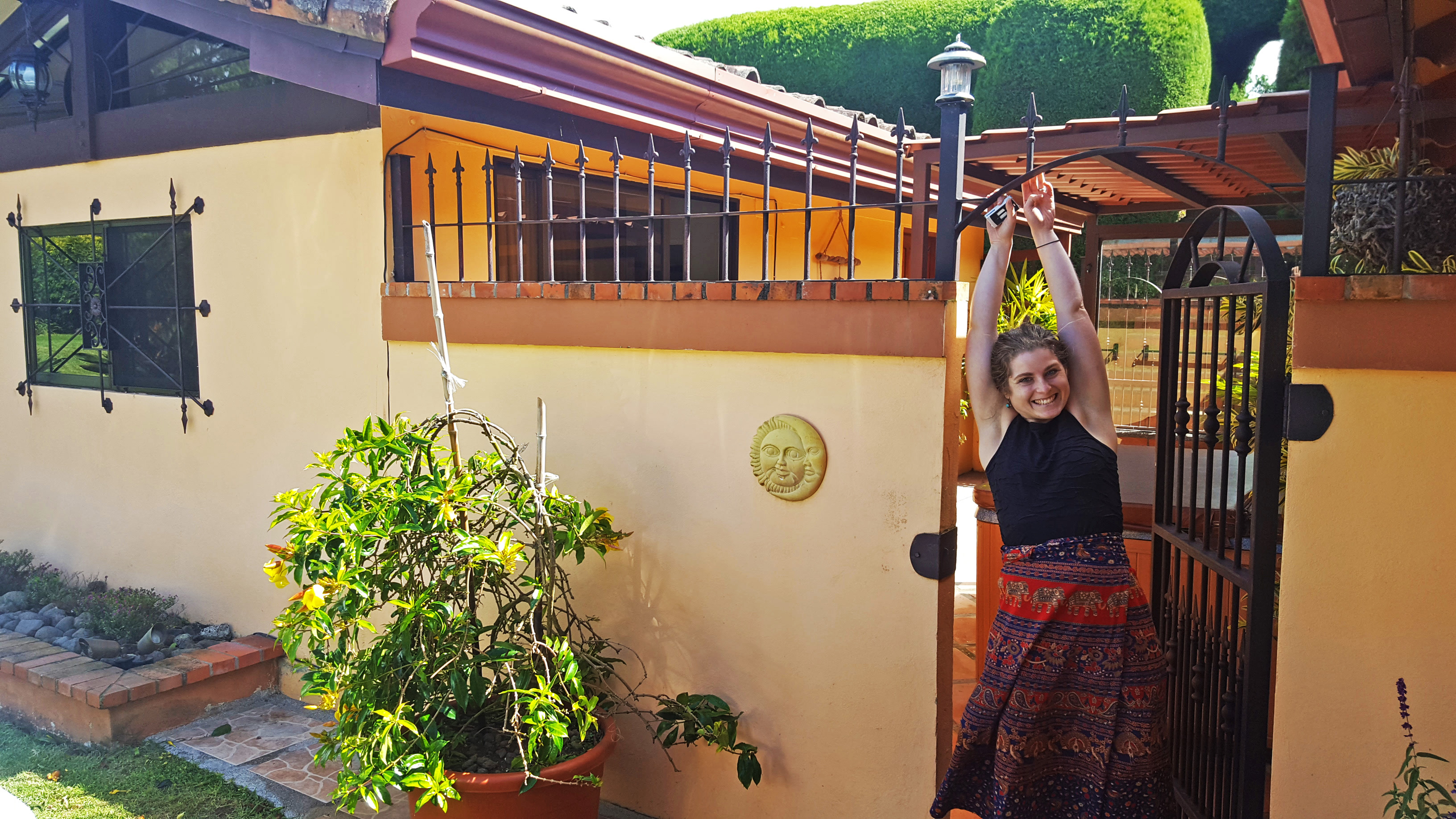 Just hanging out our first morning in Costa Rica

Unfortunately, our host was away because of a family medical emergency, but we were still able to interact with Elena and Fredy who are responsible for keeping the place up and running. We arrived on a Tuesday, which meant that all of the local spots were closed for the night.

We went on to a pizzeria and gastropub for carbs and beer. Mmm. It was cute. A mix of locals, expats, and tourists, their focaccia was absurd and the beer was better than expected. We were exhausted so we headed back to our little BNB for a shower and some sleep. 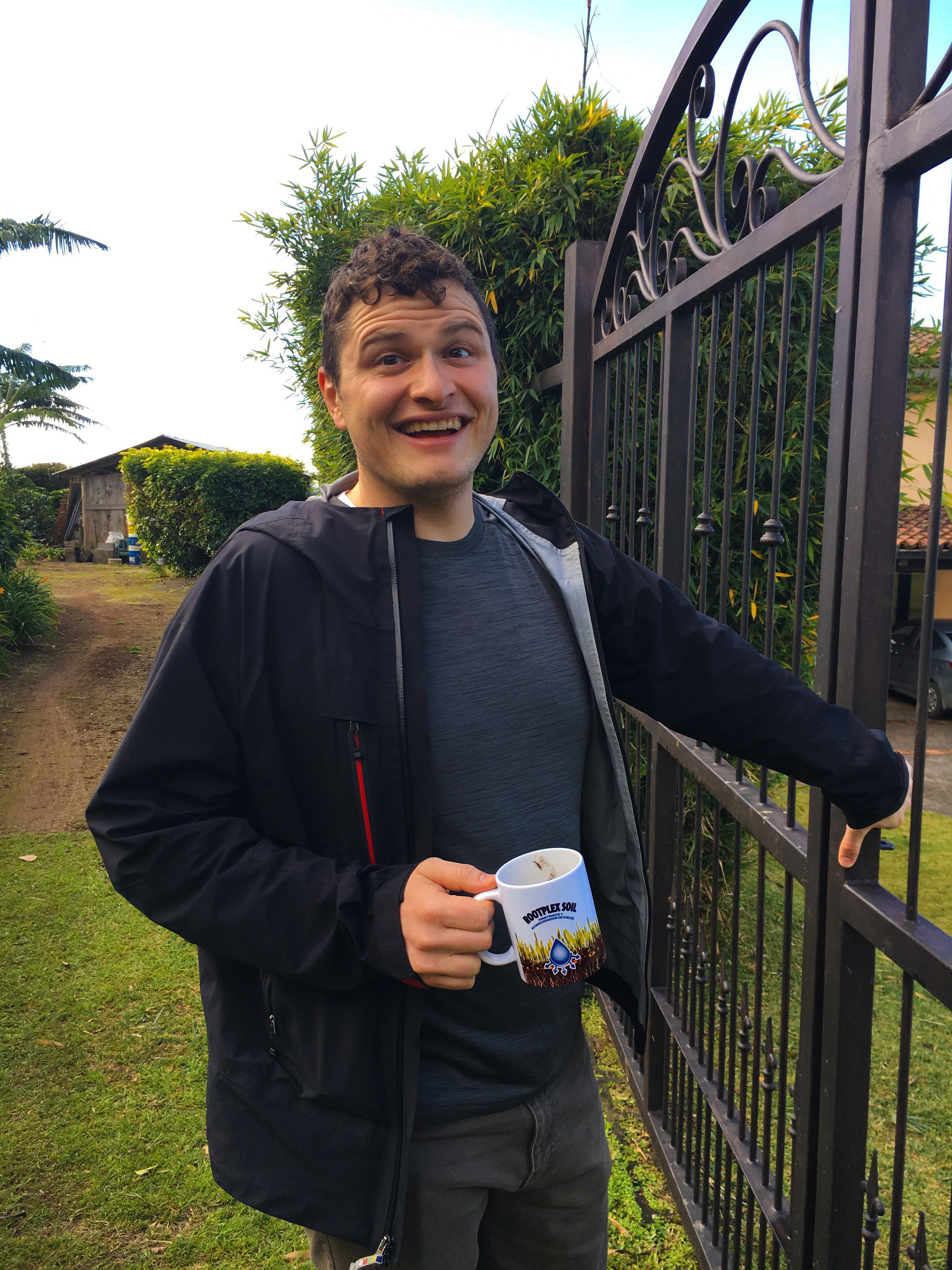 On the hunt for coffee cherries

Something to know about Stephan and I’s travel style is that he doesn’t like to miss a single moment of sunlight, while I appreciate the opportunity to relax and enjoy some extra sleep. So, the next morning, the sun’s up, Steve’s up. He had already explored the immediate vicinity before I even got dressed. After making a cup of coffee we joined the dogs to enjoy the post-rain sunshine. 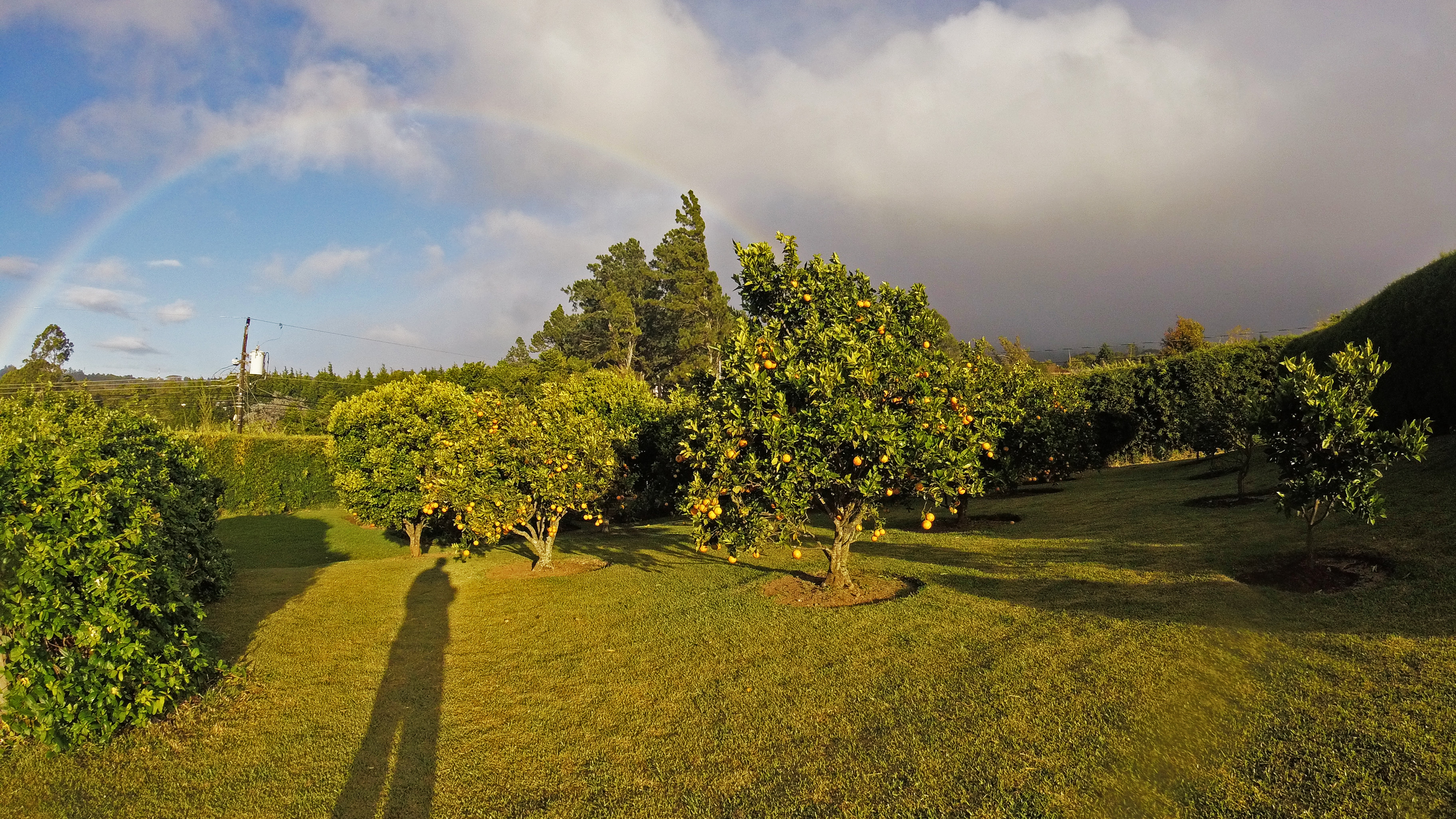 The beautiful orange grove at the front of the property.

I can’t stress enough how incredible this place was. It was vast, serene, lush, perfectly maintained, and isolated. It was also the perfect introduction to Costa Rica. Initially, we were a little confused. We knew we were staying at a coffee plantation, but couldn’t seem to find the coffee plants. What we did find were orange trees, tangerines, birds of paradise, and immaculate landscaping.

Where was the coffee? As it turns out on the back of the property was a large, winding iron gate. Picture The Secret Garden mixes with Pan’s Labyrinth. I felt like Guillermo del Toro might be just around the corner. 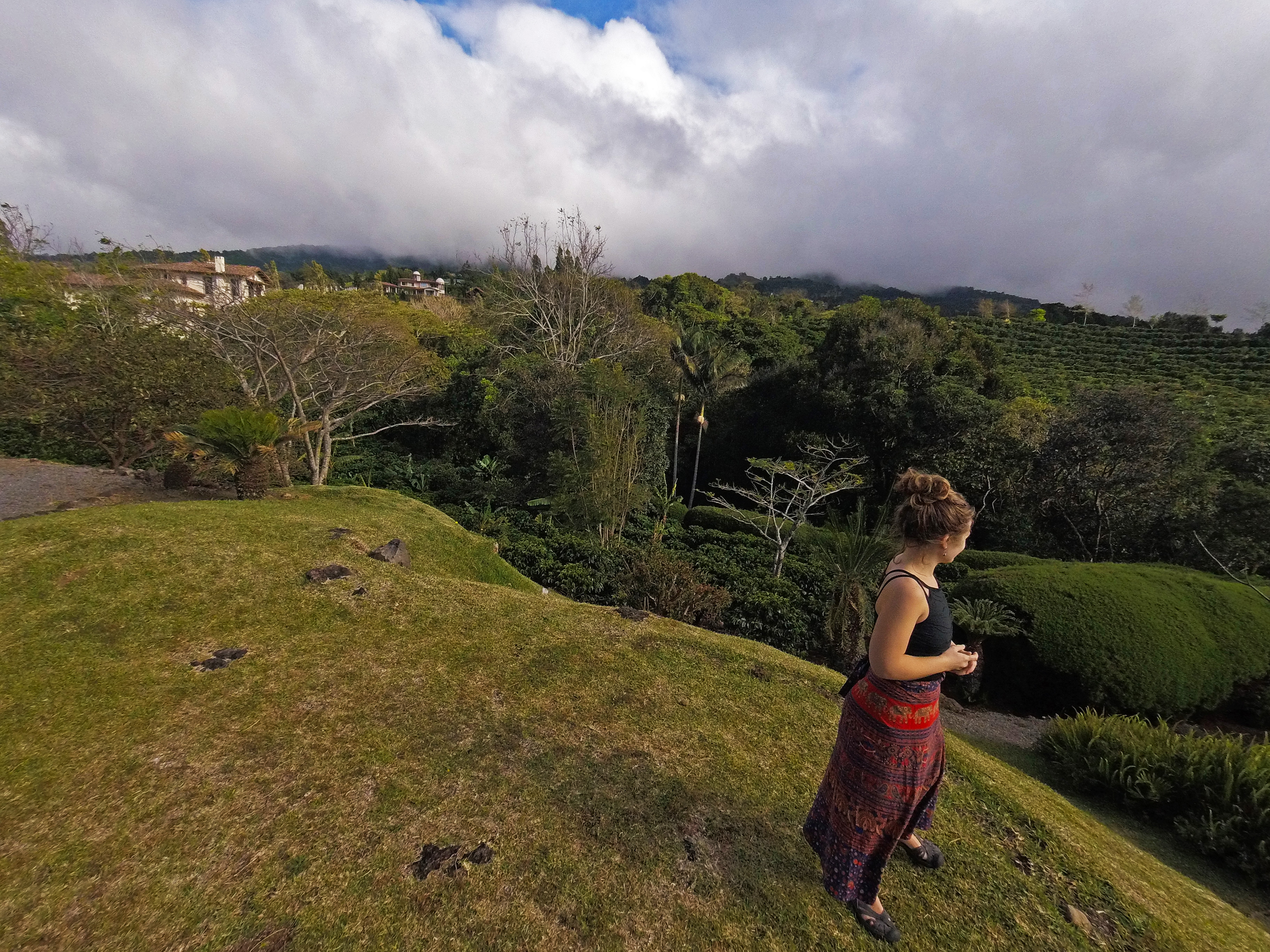 Enjoying the view from the back of our Airbnb

Beyond the gate was genuine paradise. I long for that kind of discovery and surprise, and it’s an absolute rarity. Imagine being greeted by a sign leading you to a labyrinth, meditation garden, and coffee fields. There were looming banana trees lining a path to a small building where coffee cherries are sun-roasted and dried. Along the path are also numerous coffee plants with chartreuse, pink, and vibrant red cherries. 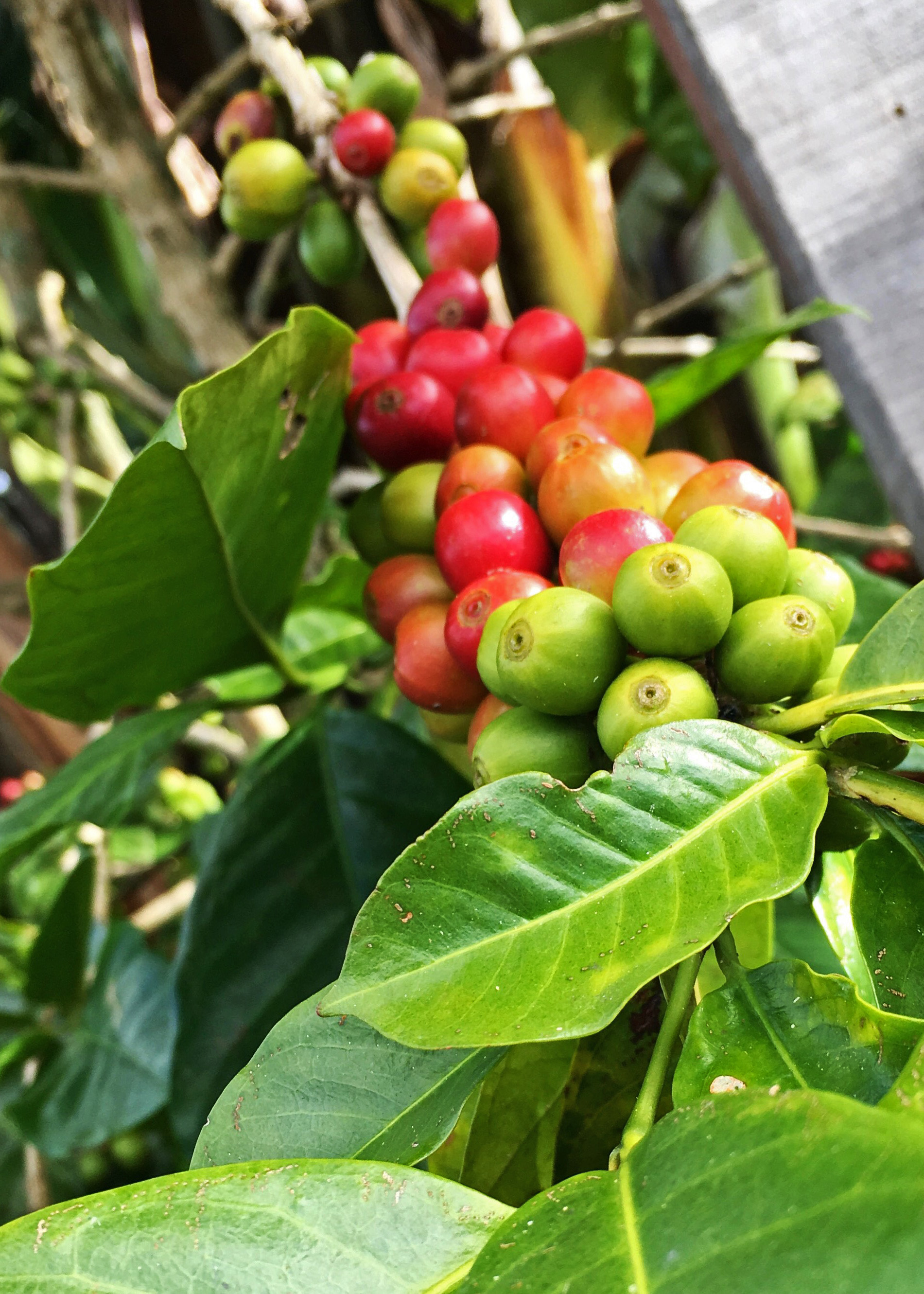 We found the beautiful coffee cherries.

There were hedges cut at perfect 90-degree angles, 10 feet tall, with small archways that allow you to sneak away to the other side and see the vast mountains and fields of plantation and landscape as far as you can see. There a small shelter with two tiny stools next to the river where you only hear the water, birds, and rustling leaves.

What I mean to say is that I don’t have the vocabulary to illustrate this land and represent it as it truly is. I’m going to let the pictures to a bit more of the talking for me.

After we finally pulled ourselves away from Concepcion de San Isidro, we were on our way to La Fortuna, Costa Rica, home of Volcan Arenal. On our way out we left with a few bags of coffee that we had purchased from the bnb and were recommended to take a more local trajectory via Route 1. This inadvertently landed us in San Pablo, about 20 minutes southwest of our bnb. We stopped to admire a beautiful, ornate Catholic Church and try to pin down a spot to eat.

Steve had pointed out a tiny little spot just south of the church that he wanted to check out. Out front, there was an older gentleman hanging grapes and apples for sale. Since it was hardly 11 AM, we weren’t sure if they were open. Even with our language barrier, he made it very clear that he was happy to have us. He quickly disappeared down the long, narrow corridor to retrieve his wife who did all of the cooking. 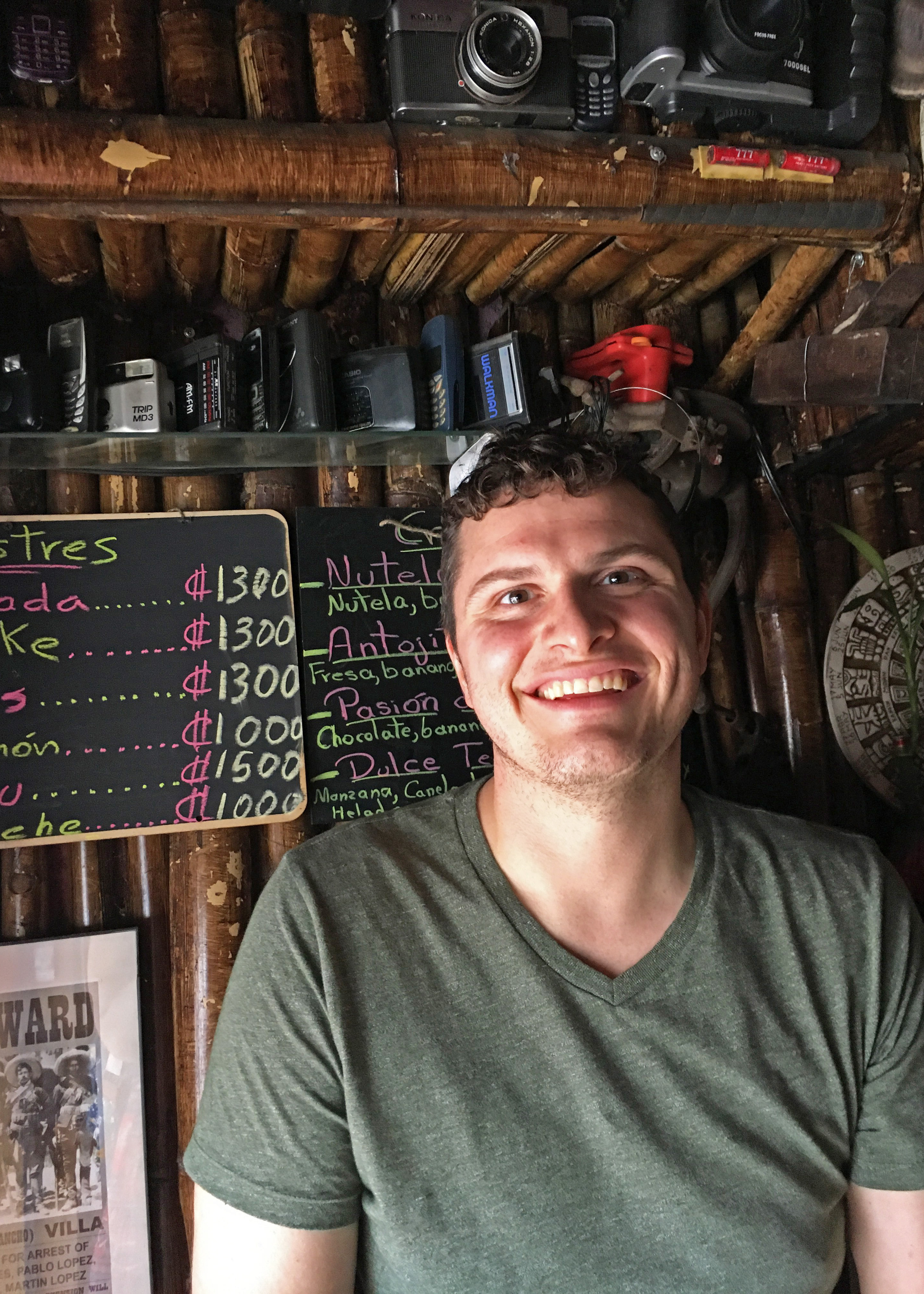 The menu consisted of a wall of little chalkboards. Alex, the proprietor of the space who showed up shortly thereafter, had an extensive collection of archaic electronics, pagers, televisions, phones, etc. There were a total of 3 bar stools that comprised the entire dining area, and the warmth and comfort were extensive.

I would argue that this was our first of two truly local food experiences in Costa Rica. We had cas juice, which is a small fruit that tastes like a mixture of lime, grape, and mango juice. Lucious, unique, and satisfying. Also, our first chicharrones. I did not realize that there were so dense. Don’t think pork rinds, think 2-inch bricks of solid pork fried in pork fat. Yikes. Yum. Also, papas antojitos. Aka french fry nachos. Whew. The hospitality, the location, the comfort, the food, the intimacy. If you’re in San Jose, make it a point to visit San Pablo.